Gamer ~ An interesting new role for “Dexter” lead actor Michael C. Hall and an old idea for a movie with 21st century gaming trappings make this flick much better than it should be. New spins all around are a good thing it would seem. The problem is it gets old rather quickly even with its shiny new skin.

The story itself, evil computer entrepreneur builds the ultimate virtual game with real people and then takes it a step further – a first person shooter where the player controls a real death row prisoner in a real firefight. This is accomplished through the magic of nanotechnology. Add some good music, some hip stars, and mix, you have Gamer.

There’s not nearly enough of Ludakris, or Kyra Sedgewick who is deliciously diabolical here. Gerard Butler is functional at best as a stereotype Kurt Russell tough guy from a dozen different movies. Michael C. Hall however steals the show as a decidedly un-Dexter-like psychopath. The dance number at the end (no, I’m not kidding) however, is decidedly effed up. 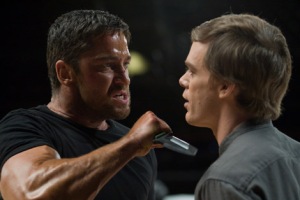 Question – and it’s the flaw that kinda ruins the flick for me, and throws the whole plot into chaos – if you have nanites injected into your brain, wouldn’t it be a simple matter to have a nanite GPS or tracking system? It’s only logical in my mind, but of course it wrecks the most of the story here.

Neat concepts, interesting acting and great soundtrack make this a worthwhile watch, but don’t pay too much for it. Must see for the genre folks.