Folks who know me personally know I’m addicted to Coast to Coast AM late nights. They cover lots of different topics on the show, now hosted by George Noory, but the nights that I love are the ones about UFOs, cryptozoology, and conspiracy theories. Yeah, I’m a nut for that stuff. Add in that I grew up in the Pine Barrens of South Jersey, where nobody jokes about the Jersey Devil when they’re outside at night – you know I’m a sucker for the new Hoax Hunters comic from Image. 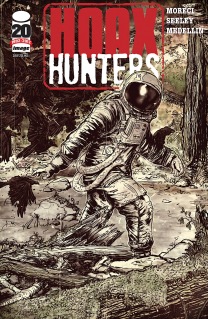 Writers Michael Moreci and Steve Seeley have created quite a phenomenon with Hoax Hunters. It’s everything I could want, it’s Coast to Coast AM mixed with “X-Files” in comic book form. Described as “Cryptids. Aliens. Monsters. All the world’s bizarre secrets–what if they were real? Their existence would be debunked by a reality TV show! HOAX HUNTERS is that show, publicly disproving all variety of lore. But their real goal is the opposite: as the world’s dark corners surface, the HOAX HUNTERS cover them up. They demonstrate that the truth isn’t out there.” Again, what more could I want? The creators have even promised a Jersey Devil appearance in the future.

There are two issues of new material out now, plus a ‘zero issue’ that collects the stories that first appeared as back-up in Hack/Slash #1-10. Get out to your local comics shop now and check them out! This comic rocks!

Hoax Hunters has a website and blog that you visit here. And don’t forget to check out this episode of the Biff Bam Popcast featuring Michael Moreci and Steve Seeley!