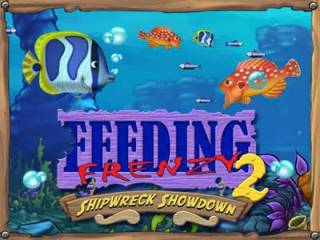 I am always leery of movies, especially sequels, with long names and longer subtitles. I guess I should have the same aversion to that type of thing in video games as well. Here, we have another free download from the PlayStation Store called Feeding Frenzy 2: Shipwreck Showdown.

Now I had never heard of Feeding Frenzy before, but apparently the game from Pop Cap and Sprout Games has been around for a while and is even available to play free online. The set up is pretty simple, you’re Boris the Butterfly Fish, you eat the fish smaller than you and avoid those bigger than you. When you eat enough little fish, you become a bigger fish. Simple as that, survival of the fittest basically.

I really kinda dig this very simple game and wish I’d tried it sooner. Regular readers of this blog know I have a lot of trouble with the PS3 controllers. Feeding Frenzy actually offers an easy and efficient way to get used to using the controllers. The more I play, the more practice I get in for future games of other types.

Besides being a great gaming practice games, it’s also kind of relaxing with a fun score. I dug this game a lot.