Man of Steel – My Take

Man of Steel ~ We’ve been on this ride before, a new Superman movie. I remember the thrill and awe of the first two movies with Christopher Reeve, and the disappointment of the following two as well. And then two decades later we got Superman Returns, and while I had huge issues with the ‘super stalker’ and ‘deadbeat dad’ subplots, Brandon Routh wasn’t bad as the man of steel, Kevin Spacey was brilliant as Lex Luthor, and the plane rescue had to have been the single greatest superhero special effects scene filmed up until that point. I enjoyed quite a bit of it. And if I enjoyed it… you know what Hollywood has to do, change it.

I have talked before about how I feel about origin stories, no need to chew on that again. But the fact is they (writer David Goyer and director Zack Snyder) have changed Superman’s origin. If not for the fact that everyone knows Superman’s origin I wouldn’t have a problem with it. It’s the Moses story, the Jesus story, the immigrant story, the perfect origin for a perfect hero, and they had to tamper with it.

In this new version, there is no requisite scene of Jor-El and Lara holding each other as krypton explodes and their son rockets away to safety and his destiny. It reminded me of the latest movie version of Spider-Man where Uncle Ben never says, “With great power comes great responsibility.” Why? If it’s not broke, don’t fix it. Some traditions should stand.

Instead of a tender tragic moment, Man of Steel delivers the Kryptonian Civil War, General Zod murdering Jor-El, and Lara on the stuffy Science Council (although unnamed as such in this flick). At the last minute, almost as an afterthought, they go, oh by the way, Krypton is doomed, and about to go boom. We spend a good twenty minutes or so on Krypton, not a frozen crystalline weirdness that it’s been on film for decades, but almost something resembling the comics Krypton. I loved the wing machine, Kelex, and the jungles and cities. I would have squeeed if we’d gotten the actual Scarlet Jungle or a thought beast.

Zod here is a military leader who attempts a coup on the council, and with his underlings (the also unnamed Black Zero terrorists, a name only learned from movie affiliated toys), is sentenced to do time in a space singularity. Again, we don’t hear the words ‘Phantom Zone’ until much much later. What is Goyer’s resistance to using correct terms for people and things?

We did get a few little tidbits in the flick. No after credits scene or cameos or even mentions of other DC characters really. We did see a LexCorp truck at one point. I was thrilled seeing the names of real Phantom Zone character names in the credits – had I heard them out loud in the film, I would have loved this movie a lot more. Jax-Ur! Dev-Em! Nadira! We’re talking fanboy heaven here. Comics fans like Easter eggs, why not give us a few?

The cast was surprising, both good and bad. Amy Adams as Lois Lane is the plucky reporter from the 1940s Fleischer cartoons, wonderfully updated not to a 2013 standard but to a respectful current version. She won’t seem dated to audiences a few decades from now as Margot Kidder does in her then highly acclaimed tour as Lane. Watching her performances now just scream 1970s so loud. Adams is amazing for the most part, only briefly falling into annoying mode once or twice. 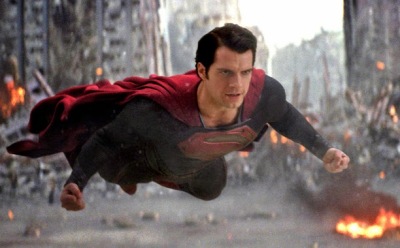 Henry Cavill, in my opinion, and I know many friends who disagree, is only just adequate. He is suitable alien, and distant, and anti-social. Superman is an alien, yes, but he’s not any of those other things. He is sensitive, and caring. Remember in Superman II when the three Phantom Zone villains discover his true weakness? He cares. Cavill’s Superman never gives me that impression ever. In Man of Steel, when Zod demands that Kal-El be delivered to him, if it was Christopher Reeve, or even Brandon Routh, the Superman/Zod confrontation would have happened in the next few seconds, or however long it would take super speed to get our hero to the villain’s lair. Goyer’s Cavill takes his damned time.

Henry Cavill as Superman lacks heart, he lacks love. Superman loves the human race, he believes in the human race, and he wants to make them better, to inspire them to greatness. I never believed Cavill in the role except for one or two brief moments. Let’s face it, and I’m not saying this to be old school – put Christopher Reeve in this exact film, in this same role, with the same dialogue and direction, and I would believe him, Cavill I would not, and do not.

Kevin Costner will hopefully be remembered come Oscar time because he deserves it for his performance as Jonathan Kent. That said, I hated the character of Pa Kent in this movie. Just the concept that he would tell his son maybe he should have let people die rather than reveal his powers just aggravates the hell out of me, and is so against his character. And his death, his sacrifice that forces young Clark not to save him when he easily could have… I wanted to scream at the screen. Who is this man? Because it sure as hell isn’t Jonathan Kent.

Speaking of fathers, Russell Crowe’s Jor-El leaves the movie early, as I mentioned, a victim of General Zod. He returns later in a method similar to the earlier Superman films, as a hologram, or more accurately an interactive artificial intelligence. What boggled my mind is the fact that Crowe as Jor-El had more chemistry with Adams as Lois than Cavill’s Superman did.

I was a bit iffy about Michael Shannon’s Zod at first. He can be brilliant but sometimes he’s a one note actor. If we’re judging Shannon as if he was playing Terrence Stamp’s general Zod, he fails miserably, but the thing is he’s not. This is a different Zod. He is almost a heroic figure. He is commissioned with the responsibility of continuing the Kryptonian race, and Kal-El actually stands in his way, a war criminal of sorts, the one keeping krypton from flourishing again. Really, how can we root against a man with that new MO and motivation? Despite his methods, this is one of the good guys, right? Shannon’s portrayal is good, only falling into cartoon mode once or twice.

As long as we’re talking about Zod, we come to two of my biggest problems with Man of Steel. Here be spoilers, be warned. Superman has to murder Zod to stop him. At the climax of the film, Zod gets desperate and starts to heat vision a family so Superman breaks his neck. The powers that be behind this flick, Goyer and Snyder, among others, have defended this move, saying that Superman has to learn not to kill by having experienced it.

Yes, something similar happened in the comics. John Byrne had Superman execute Zod and two other Phantom Zone villains in the post-Crisis continuity, and I hated it then as I hate it now. With over seventy-five years of source material it hurts me deeply that the hero’s darkest hour is what some people think should be brought to the screen. There are much better stories, people, probably hundreds, if not more.

One thing that superhero movies have brought to the screen recently, especially the billion dollar blockbuster, Marvel’s The Avengers, is the level of destruction. Well, super powers, the wrath of gods, can bring wholesale destruction down on us all, and now with the special effects available and the popularity of superheroes, we can now show combat on a scale similar to what is sometimes shown in comics.

Listen to me carefully. It does not translate to the big screen. I want to see these big smash-ups and slugfests as much as the next guy, but when it happens in ‘real life’ in a movie, it just does not work. We live in a post-9/11 world, and even over a decade later, those images have a blood curdling effect. To borrow the words of comics writer Mark Waid, it’s disaster porn, plain and simple, and I don’t wait to see it. I want to leave a Superman film inspired, uplifted, wanting to make the world a better place – not mourning the dead.

In conclusion, Man of Steel was a good movie, but it wasn’t a good Superman movie. I look more forward to Batman Vs. Superman, or maybe the much anticipated Justice League film, than I do ever seeing this one again.

For other perspectives, including my own, below is the Biff Bam Popcast featuring Andy Burns, JP Fallavollita, Jason Shayer, and special guest, Michael Moreci of the Hoax Hunters comic series, done at the time of the film’s theatrical release:


And then there’s also JP Fallavollita’s review of the film at Biff Bam Pop! here for a very different view.