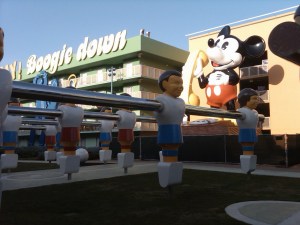 Most of the time when one thinks of Walt Disney World and where to stay – places like the Grand Floridian, the Contemporary and the Polynesian come to mind, but those aren’t you’re only choices, and certainly not your only price range. Economy, low rent, even called white trash by some folks, Disney offers several less expensive places to stay while visiting.

Pop Century is one of the economy resorts along with the All-Stars and a few others. My most recent stay was there, mostly because we were only crashing for a long weekend. It’s a place with a theme right up my alley, pop culture. The place is consumed and decorated by all manner of trivia and nostalgia. And like the All-Star resorts, the buildings are adorned with gigantic knick-knacks. The building we stayed in, the “70s,” was surrounded by giant 8-tracks, a huge foozball table and a really big Big Wheel, among other things. Fun. 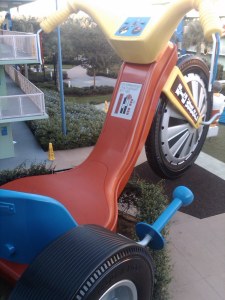 My problem with the resort, other than the other patrons, which I suppose just can’t be helped, is the name of it – Pop Century. It’s all set up by decade – the 1970s, the 1960s, the 1970s, the 1980s and the 1980s. Isn’t there like half a century missing there? Did the 20th century start in 1950? No, but pop culture kinda did. Still, it’s a bit misleading, and not to mention disinformative to kids learning about the passage of time. Not sure if we’ll be staying here again, but still, fun.