This is the first collaboration of original Black Sabbath members Ozzy Osbourne, Tommy Iommi, and Geezer Butler in years, and the first studio album from the band in almost two decades. To say there has been much anticipation would be redundant. The trio was joined by Audioslave and Rage Against the Machine drummer Brad Wilk when original Sabbath drummer Bill Ward declined to participate.

I got a chance to listen to the album recently in an iTunes sneak peek. “13” by Black Sabbath, produced by the legendary Rick Rubin, will be released on June 10th in Europe, and on June 11th in America. Here are my first thoughts on hearing the album.

“End of the Beginning” The album’s opening track is very heavy, but without being too retro, a sound new rather than old. The sinister quality is like a blast from the past, a reminder of what Black Sabbath once was. Ozzy is the star and yet also a cog in this product. When it kicks in, it does go down the retro road, but it also gets a bit more comfortable. However, when it does kick in, it becomes more Ozzy than Sabbath. Despite all that, I dig this.

“God Is Dead” – This is the single everyone has been talking about for weeks now. It’s amazing to me that music still travels by word of mouth in this internet age. Ozzy seems to take a backseat to the music, and let the guitars and bass, and especially here, the lyrics, lead the song. I love the conflicting and self-arguing words of the tune. Ozzy’s sing-song style here is like a trip through time back to the golden age of Sabbath.

This single and the above track were featured in the season finale of “C.S.I.” whetting the appetite of many a fan and non-fan. These two tunes prove relentlessly that not only was Black Sabbath back, but that they easily hold a place in today’s music world. There is evolution and relevance here that is not present in other comebacks of the era.

The quality continues as the tracks run down. “Loner” is better than average with thought provoking lyrics. “Zeitgeist” is uncharacteristically gentle and caressing in its softness. This is another new sound in a sea of noise from the past. I like it.

“Age of Reason” – Speaking of new. This reminds me of “End of the Beginning” in its dual past and present groove. Ozzy again takes backseat to the guitars of Iommi and Butler, and the lyrics take precedence over his voice. All that and the power of his voice never waivers.

Not all of the songs are hits out of the ballpark however. “Live Forever,” “Damaged Soul,” and even the vindictive rocker “Dear Father” are good, but pale with the rest of the album in my opinion. The deluxe version of “13” also includes the tracks “Methademic,” “Peace of Mind,” “Pariah,” and “Naivete in Black.” These were sadly not included in the special iTunes sneak peek.

This is superior music from superior musicians. Black Sabbath started heavy metal, and “13” proves without a doubt that they still rule it from high atop the mountain. 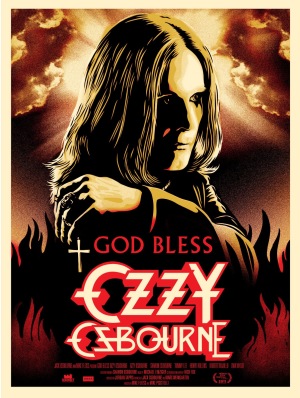 God Bless Ozzy Osbourne ~ This documentary produced by his son Jack explores the life, career, and addiction of the prince of darkness of the rock and roll world, Ozzy Osbourne. His early years, his time with Black Sabbath, his solo career, his reality television show, and of course, his addictions. Family, friends, bandmates and other musicians are interviewed in the in-depth, incisive, and surprising bio. Recommended.

Cedar Rapids ~ This overlooked film is a screwball slob comedy about an insurance sales convention in, where else? Cedar Rapids. While I prefer both John C. Reilly and Anne Heche in more serious roles, they shine here. Ed Helms stars as a naïve salesman whose job is in jeopardy as he attends the convention. Circumstances convince him to take chances and live life. Fun and mostly harmless, worth watching.

6 Days to Air: The Making of South Park ~ This intriguing documentary takes a look at the frantic rush to put together a new “South Park” episode each week, make it timely, make it funny, and make sure it gets on the air. It also explores the working relationship of creators Trey Parker and Matt Stone and their recent success with “The Book of Mormon.” Fascinating viewing for fans of the show and even those who are not.

Alex in Wonderland ~ I saw this madcap 1940 one-reeler recently on TCM. Part of the “Broadway Brevities” series that seems to take a lot of its technique from the Three Stooges shorts, this one stars Walter Catlett and Eddie Foy Jr. as feuding brothers-in-law who end up at a upper class masquerade party where mistaken identity and pie-throwing ensue. Fun.

One of the gods of heavy metal music, if not the god of the form, has left this mortal coil for the realm of sorcerers and warriors.

Earlier today, Ronnie James Dio passed away peacefully in his sleep from complications of stomach cancer. He was 67.

The musician, singer and songwriter performed in a multitude of bands, but most notably in Rainbow, as Ozzy Osbourne’s replacement in Black Sabbath and with his namesake Dio. He popularized the ‘devil horns’ as a symbol for heavy metal.

We have lost a legend and he will not be forgotten. Rock on and rest in peace.