Harry Potter and the Deathly Hallows, Part 1 ~ I’m really not sure how folks with no background in the books, or these characters can walk into this film and understand everything. It just feels to me like the books are needed as a primer, especially here and with the last film as well. Props to the franchise that so many folks are familiar enough with the Harry Potter mythos to make this flick successful. I can only imagine the need for Cliff’s Notes will only get stronger with Part 2 of this installment come summer.

Now what I liked about the last film, Harry Potter and the Half-Blood Prince, that the filmmakers veered from the book and showed us new scenes and added bonuses not seen in the source material, is actually what I didn’t like about this one. I always like when the ‘real’ Muggle world is brought more into Harry’s wizarding world. Scenes of Harry, Ron and Hermione in London and listening to Muggle music and pop culture are always welcome. The other things are unwelcome for me. 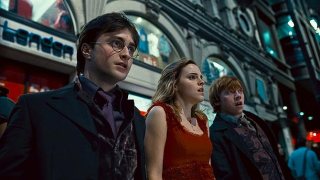 I am thinking specifically of the dance between Harry and Hermione to Nick Cave’s “O Children” as most disturbing. Despite her spurning ‘the chosen one’ for Ron, the dance is quite intimate, and the further mention that the two spent weeks alone together – anyone who hasn’t read the books might surmise that Harry and Hermione did get together at some point – especially when seeing what the horcrux tries to make Ron believe later. It’s a muddy road for Potter neophytes, and I have to wonder if the filmmakers were playing with that very notion.

The movie continues the story well, and unfortunately ends on a down note, almost similar to the end of The Empire Strikes Back, both a defeat and a cliffhanger. Whether I was invested or not, I would want to see the final installment. The actors continue to hone and improve their characters and performances. And the animated sequence depicting the tale of the Deathly Hallows is unique and intriguing. Must see for Potterphiles, but maybe not for those unfamiliar.

Hi, my name is Terry Willitts and I’m honored to be guest-blogging at WELCOME TO HELL, Glenn Walker’s pop culture blog. Glenn invited me to weigh in on the most recent AfterDark Horrorfest, the fourth iteration, as I’d just watched all eight movies over the past month. Not being one to turn away a chance to give my opinion, I was more than happy to accept.

I’m a huge fan of horror movies, and while my personal preference tends to either zombie flicks or psychological horror, I do appreciate a good slasher flick, weird monster movie, and even gripping personal suspense. I’ve seen quite a few of the previous AfterDark movies, though this is the first time I’ve gotten my hands on the entire run of a festival and watched them all in a short period of time.

Without further ado, let me start with what I feel are the weakest three of the series. (Yes, this the first of three posts, and I think it best to start at the bottom and work our way up.)

First off, we have ZOMBIES OF MASS DESTRUCTION. Now, if you’re like me (reference that bit above about my personal preferences in horror movies if you must), you just had a nerdgastic moment with that title alone. You know you did.

The sad thing is, the title really has nothing to do with the movie, outside of there being zombies. That title is made of unadulterated win and they should write an entirely different movie, maybe a military experiment gone wrong, etc, etc, etc, and use that title. Instead, we get a sleepy New England island that is suddenly, and inexplicably, invaded by zombies.

This movie, directed by Kevin Harnedani (who co-wrote the movie with Ramon Isao), is billed as a comedy-horror, and rightfully so – it takes a very tongue-in-cheek approach to zombies. And that’s fine.. however, it suffers from a couple major problems.

First off, the characters, are pretty much two-dimensional caricatures of society. It’s almost as if they decided that what this comedy-horror movie needed was some social commentary. Now, I’m not the sort to say that my entertainment can’t have any depth… far from it, though I’m not sure that anyone going to a tongue-in-cheek zombie movie is going to want a serving of Deep Thought with it. (I don’t think I would, really.)

The only characters that I find remotely interesting AND funny were the gay couple, Tom Hunt (Doug Fahl) and Lance Murphy (Cooper Hopkins) – and while they went with a lot of the easy jokes with them, I didn’t find them to be insulting, but actually cute, clever and they were the only ones I found myself rooting for.

The other problem for me with this movie – pink blood. There’s at least one scene where copious amounts of blood, tinged pink, is involved. I cannot remotely take a movie seriously if the blood is tinged pink. At the sight of pink blood, my suspension of disbelief is just thrown out the window. (Let me clarify something – I’m a big fan of small-budget movies. BIG fan. I’m willing to accept/forgive a lot of things, but pink blood is not one of them.)

Unless you’re intent on watching all eight movies, I strongly advise staying away from this one. There are plenty of other zombie movies out there that are much better. On a scale of 1 to 10, I give it a 3, and mostly for the gay couple.

Fortunately, that was the only true “dog” out of the eight movies. From there, we’re going upwards and onwards.

Next, KILL THEORY starts off with an inmate being released from a psychiatric facility. From the discussion with the administering psych, you can tell that he’s not one hundred percent… which, of course, begs the question why is he being released? (Though, it’d be a short movie… or at least a different movie, if he hadn’t been let go.)

We then jump to a trope of horror movies – a group of students getting together for a last weekend together in a secluded house on the lake. And, after meeting all the characters (most of them are stereotypical ones, too), the killings begin. This is a directorial debut for Chris Moore, though he’s produced quite a few movies (notably the first three American Pie films and the Project Greenlight show.)

I had a huge problem with this movie – focusing the camera tightly on a person and having them scream so loud it hurts your ears while you’re watching the movie does not equate horror for me. It equates aggravation. This movie was borderline obnoxious with the fat guy (one of the stereotypical characters in this movie) just screaming at everyone, at the camera.

However, despite all of that, there is a tension to this movie that cannot be denied. The plot, though nothing original, has a couple little twists that are interesting enough to keep you hooked. And the twist at the end really made up for a lot of flaws. (I’m the sort of person who can find a movie to be kinda disappointing-ish and then have a good ending save the movie. For me, this is what happened.)

This is straight slasher-gore with a good deal of tension-suspense. Nothing extraordinary, but a decent flick in general, once look past the flaws. On a scale of 1 to 10, it’s a 5. 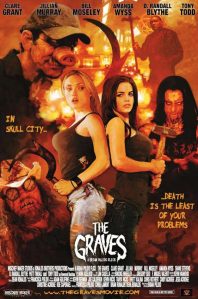 THE GRAVES is the story of two sisters who, on their last weekend together before the eldest sister goes to New York, go on a random drive into the desert and end up at the Skull City Mine roadside attraction. There, they find themselves struggling to survive against a threat both physical and supernatural.

The movie is written and directed by Brian Pulido, a comic book creator known for Lady Death and Evil Ernie. I guess this explains why the main characters are shown to be comic book geeks, though it serves absolutely no other purpose. (Well, perhaps to appeal to the geeky fan boys – the idea of two hot and sexy comic geeks is a good one – and the girls ARE very attractive.)

My biggest problem with this one is that it seemed to want to cram too much into too short a movie. (Ironic, considering that most super-hero movies do just that, and Pulido is known for being a comic creator.) I mean, this could have likely done well enough with the crazy blacksmith in the mine killing people, and perhaps a touch of the supernatural just to explain things and give it that extra edge. Instead, we also have a cult of delusional worshipers (led by a priest, played by Tony Todd – Candyman to most of you, but he’ll always be Sgt Warren to me) that just kinda… I feel that the plot meanders a bit too much, to its detriment.

In short, it’s a good movie. Not great, but certainly much better than ZoMD. Don’t go out of your way to watch it, but if you can get it for free through a free rental code for Redbox or Blockbuster Express, give it a shot. You might be more forgiving than I. On a scale of 1-10, it barely makes it past 5 to a 6.

And that’s it for part one; in the next installment, we’ll touch upon the middle 3 for me – The Reeds, Dread and Skjult (Hidden).

What Not to Rent at the Video Store

WHAT NOT TO RENT AT THE VIDEO STORE

It’s Friday night and you don’t want to go out. You just want to snuggle on the sofa with your honey with a few videos and some Orville Redenbacher‘s Sweet ‘n Buttery Gourmet Popping Corn (the absolutely best popcorn on Earth, no contest).

So it’s off to the video store, yes, one of life’s great adventures. First you have to choose a video store. If they want blood and urine samples to rent, that’s a bad choice of video store. If their foreign section is only one shelf, the sign says “F’ern,” and the staff thinks Fellini makes pizza down the street, bad choice. If the employees are playing makeshift basketball with a mannequin head and a trash can on the counter, bad choice. If the movie posters in the window are for Titanic and Patch Adams and are bleached white from the sun, no. If they have a Jean Claude Van Damme section under ‘drama,’ uh uh. And if they have Moulin Rouge playing on the monitors, run, don’t walk to the exit.

The new movies, if there are more than five copies left, forget it. It sucks and obviously no one wants it, unless it’s the first week it’s out and the public at large doesn’t know any better yet.

Ask other customers what to see. Don’t ask the staff (unless you actually know them outside the store) because they’ll say anything to get you to rent anything. It’s their job, it’s what they get paid to do. Other customers are in the same quandry you are and word of mouth is always the best recommendation (my opinions notwithstanding).

When walking through the store tapes with dust on them are usually bad choices. Now, when you find a tape hidden behind other tapes (especially those with dust on them) this is a good choice. Someone has hidden it so no one else can rent it and they’re saving ot for next time. This is a winner.

Look for warning labels on the movies. For instance, avoid any films whose boxes carry words like “Adam Sandler,” “Robin Williams,” “Billy Crystal,” Moulin Rouge or any movie with numbers after the title. Any thing that has Ebert & Roper giving a ‘thumbs up’ to is also a bad sign.

So remember: no staff picks, no dust, no Blockbuster and no Adam Sandler. Good luck!