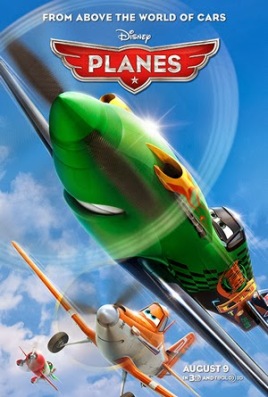 Planes ~ I was hesitant to jump back into the ‘World of Cars,’ because of the revelation I made while watching Cars 2, you know, that the ‘World of Cars’ is actually occurring in the aftermath of Stephen King’s short story “Trucks.” I know, scared the crap outta me too. But The Bride wanted to see it, so I went along.

This one is similar to Cars 2, in that it’s about racing, and in this case, planes. Dusty Clodhopper – voiced by Dane Cook, who is much less annoying when all you hear is scripted and you don’t have to see him – is a small town cropduster who wants to be a racing plane in the big leagues and enters a race around the world. Underdog makes good, that kind of thing.

We have seen this before. Good voice cast, lots of clichés with fresh takes, and jokes for the kids and the adults, Planes is a good hour and a half of harmless entertainment. There’s nothing really new, nothing to make us go wow, or how did they do that? A good Pixar flick, originally made for direct-to-DVD, so to do so well in theaters, it must have something. Enjoyable. 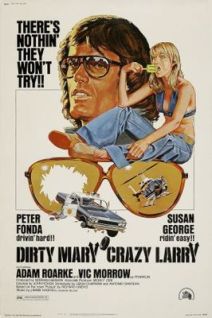 Dirty Mary, Crazy Larry ~ There was a time when I was a kid that I thought Peter Fonda was the coolest guy on Earth. He was in stuff like Race With the Devil and Futureworld and of course Easy Rider, so he could do no wrong. He was also in this charmer.

Until I saw Dirty Mary, Crazy Larry again recently I could remember very little about it. I remembered it starred Fonda, and Susan George, in the bizarre title roles, it was a car chase flick, and it was frequently one of channel 6’s late night Friday movies – you know, the ones I wasn’t supposed to be staying up watching – both because of the content, and because it was past my bedtime. Little else was retained by my memory. 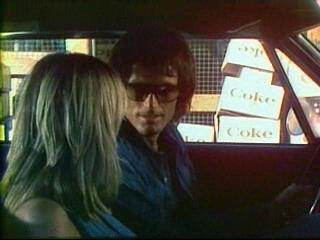 Upon watching it again for the first time in almost maybe forty years, I am struck by how really bad it is. It may have been okay or mediocre for the time (1974), but let’s just say the years have not been kind. Rather than an interesting time capsule like other seventies films I’ve watched recently, this is a creaky relic.

Loosely based on the novel “The Chase” (later known as “Pursuit”) by Richard Unekis, one can easily see the influence of earlier films of the genre like Vanishing Point, Two-Lane Blacktop, The French Connection, and even Bonnie and Clyde. The problem is that you can also see this film’s own influence on the destruction and mocking of the genre later in the decade by stuff like Smokey and the Bandit, Eat My Dust, and The Blues Brothers. This is the beginning of the car chase movie becoming a joke, amusing or not. 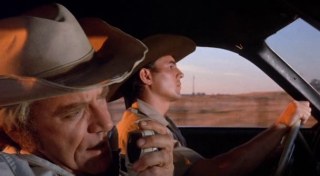 This movie is so seventies, down to the theme song by Marjorie McCoy being used throughout as if choreographed by Quentin Tarantino, to the crazy fashions and ugly cars, to the endless shots of the scenic southwest. And the late Vic Morrow wonderfully eats up the screen as the obsessed pursuing cop. It’s worth a look for the curious, but it’s no masterpiece, but Peter Fonda is still cool.

Lost Hits of the New Wave #4

“Hello Again” by The Cars.

The Cars were at the start of the New Wave but this entry, the fourth single from “Heartbeat City,” comes from late in 1984, well after the MTV video revolution. In fact, at this time, Ric Ocasek and The Cars were at the forefront of the music video world and recruited the legendary Andy Warhol to direct this one. He appears throughout, and also look for a very young Gina Gershon.

The song, my favorite from the album which is full of great tunes, both wildly popular and largely unknown, seems to me to be about The Wizard of Oz, but the video seems to focus on the dangers of gratuitous sex and violence in music videos. Somehow that seems too appropriate. 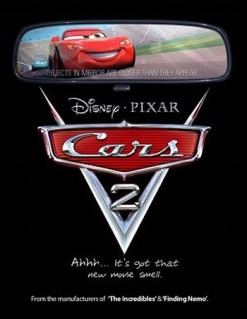 Cars 2 ~ I really liked this sequel to Cars a lot, and it has a lot going for it but one thing bothered me a lot as well – and I just couldn’t get it out of my head once it reared its ugly head. Remember the short story by Stephen King called “Trucks”? It was made into a movie twice, once for television under its own name and once theatrically as Maximum Overdrive. The story goes that something happens, some event, and machines, mostly cars and trucks, gain sentience, and proceed to wipe out the human race, and those that remain alive are turned into slaves, slaves that maintain them and fuel them. 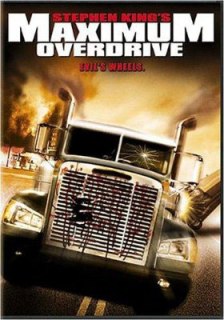 The thought occurred to me while watching Cars 2 that this was that world! In this flick, the characters participate in several international races and pass a lot of architecture, much of which featured doors and windows that were built and designed for humans, not cars as evidence would indicate. And we never see any people, only vehicles. It gave me shivers and I couldn’t shake them throughout the flick. Watch and see. If you’ve seen either of the movies, or read the short story, you’ll be freaked out.

Stephen King comparisons aside, this is a great kids movie, and terrific for adults as well. Like most Pixar flicks, it works on many levels providing entertainment for old and young. I especially liked that Cars 2 was a perfect sequel for Cars in that kids who saw the first movie when it was right for their age, will see Cars 2 a few years older and still find it age appropriate for them. The story, the development, the action, language and even the small amount of perceived violence actually grew up with the kids. 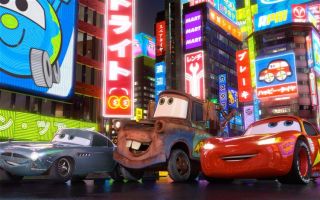 I was kinda bugged by the subpar Toy Story shirt before the movie. I would have really had a Pixar original, which are always wonderful and innovative. I guess they had to bow to the powers that be, go for the sure buck and cash in. Shame. I also noted that a whole new cast of characters, and new versions of old characters were introduced to ensure a good toy merchandizing blitz for the sequel. Nothing wrong with that but its obviousness bothered me.

On the good side, there was a lot there for me and other adults. I loved the whole spy parody plot with Michael Caine doing the voice. Not many folks realize how big Caine was in the Brit spy cinema game in the late 1960s and early 1970s. This is a fitting homage. Folks of my age will also smile at the “Speed Racer” references and homages in the race sequences. Cars 2 is very reminiscent of both the original cartoons and even the amazing live action of a few years back. Loved it. 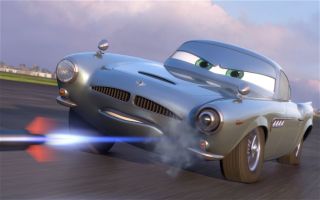 So other than the creepy Stephen King “Trucks” thing, and the short before the movie, Cars 2 is an excellent sequel and a great movie for kids and adults. Just be wary, parents, the language and violence is a bit more intense than the first one, okay? But definitely check it out.

Random Tater Pic of the Day #14