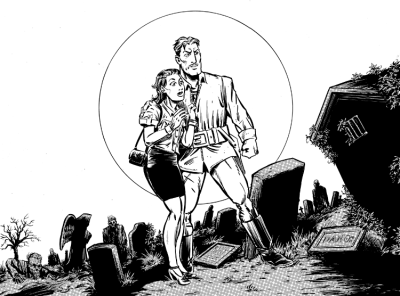 What is Ace Kilroy?

“THE YEAR IS 1937. Another World War is brewing in Europe, and the United States Government, headed by President Franklin Delano Roosevelt, is doing all it can to prepare. However, recent intelligence from that part of the world has uncovered an even more disturbing, almost unbelievable, set of facts: that the world’s worst supernatural monsters, thought only to be the stuff of nightmares, are real! Even worse, that Adolf Hitler’s Third Reich has unleashed a multi-pronged effort to turn those monsters to the side of the axis powers!

“President Roosevelt, backed by a small band of his most trusted advisers, has decided to commission decorated World War One veteran and soldier of fortune Ace Kilroy to go undercover in Transylvania and see if the threat is real–and if it is, to stop it…at all costs.

“ACE KILROY harkens back to the classic American newspaper comic strips of the mid-20th Century like Dick Tracy, Steve Canyon, and Buz Sawyer. We feature a new black and white daily installment every day, with an extra-large “color supplement” on Sundays!”

Check it out now, right here!

Rob Kelly is a guy who understands passion, and the concept of the phrase “labor of love.” Not only is he the man behind The Aquaman Shrine, he is also the writer of the smashing new webcomic Ace Kilroy, along with artist Dan O’Connor. This is his newest labor of love, and with just a few clicks of the mouse, you can help make this adventure last a good long time. It’s worth it!

Ace Kilroy is a loving tribute to the high adventure comic strips of yesteryear. My first glance at the work, which started on Halloween this year, conjured memories of Steve Canyon, and sure enough, that’s one of the strip’s inspirations. I have fond memories of the newspaper strips as a kid, reading their adventures in the black and white dailies and then in full color on Sunday – and this is the method of webcomic Ace Kilroy.

The man, Ace Kilroy, is the spitting image of Clark Gable, and a classic soldier of fortune in the late 1930s. Summoned by President Roosevelt to combat the monsters of our childhood like Dracula, Frankenstein, and the Wolf Man, who might now be working with Hitler’s sinister Third Reich. It’s clean cut but gritty action with a square-jawed hero facing off against the solid evils of monsters and Nazis. Really, Ace Kilroy is everything you want in an old-fashioned (and that’s a good thing) adventure comic. It’s good versus evil, where the good guys wear white and the bad guys wear black. You know who to root for and you know who to boo and hiss. Like I said, it’s a good thing.

Rob Kelly has an extensive background studying both comics and film, giving his sequential storytelling flow and cinematic flair. Dan O’Connor has an artistic style that perfectly matches the era and feeling needed for the strip. Together, they make the noir adventure breathe and jump off the page. Their Ace Kilroy really is a 1940s adventure movie and/or comic (take your pick, it’s both) come to life. Less than two weeks in, I am hooked.

And Rob and Dan are doing this great old-fashioned comic strip with a twist of contemporary internet promotion, and also using Kickstarter to fund it. So if you dig Ace Kilroy, become a backer! Find Ace Kilroy at the following links:

The Actual Webcomic is here.

A quick who’s who background file on the characters can be found here.

The Blog, behind the scenes at Ace Kilroy is here.

You can find the official Kickstarter page here.

And to join Ace’s Allies, click here and become an official backer!

* This article appeared in slightly different form over at The All Things Fun! Blogs, check it out here! 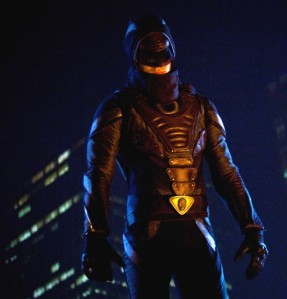 We’ve talked about this before. About how I did not want to like Syfy’s new version of the Phantom, and why tradition and source material is important. When the four-hour mini-series aired a few weeks back I was fully prepared to hate it, but I couldn’t do it. I didn’t love it, and it wasn’t really the Phantom I wanted to see, but it really wasn’t bad either.

This was not a reboot, or a re-imagining, it was the real thing, and a modern continuation of the Phantom we all know and loved. The only drawback is that it’s a new Phantom, and one for the 21st century. Everything is still there, the Phantom legacy, the Singh Brotherhood, all that. The history is intact, it’s the present and the future that diverge from tradition.

There are changes however, unnecessary changes in my opinion. Bengalla is now an Indonesian island nation of much lighter skinned folk than those of the comic strips. And of course there is the hideous Paladin rip-off costume and the over-reliance on technology – but let’s keep in mind these are the trappings of the new Phantom.

And I can’t even bust on the quality. Even though it’s on Syfy, it’s done well and nothing at all like that tripe they usually show on Saturday nights. The lead, the twenty-second Kit Walker, is played by Justin Hartley look-a-like Ryan Carnes. He’s charming and convincing and I found myself rooting for him.

So, yeah, I liked it quite a bit. Granted, I would rather have seen a more Billy Zane or Tom Tyler, or especially a Lee Falk version of the classic hero, this was a fun diversion. 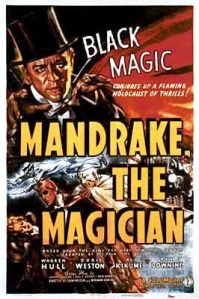 Mandrake the Magician is perhaps one of the first of the comic strip superheroes. Created by Lee Falk (who also created the Phantom) in 1934 and based on a real life stage magician of the same name, Mandrake was the template for the comic book magicians that proliferated in the comic books of the 1930s and 40s. Mandrake and his faithful companion Lothar adventured for decades in the comic strips, books, stage and screen. The year 1939 brought the Magician to the silver screen in a twelve-part movie serial from Columbia.

Warren Hull was a veteran of the hero business in the movie serials having also played the Green Hornet and the Spider. His Mandrake unfortunately comes off as the most dull of the three. Al Kikume, who played Lothar, is also no stranger to the heroic serials, having parts in the Captain Marvel and Nyoka ones respectively and later appearing on Superman on television. It’s kind of odd though that Lothar who was probably the first non-stereotyped African-American in comics is portrayed here by a Hawaiian. Their chemistry when it happens is a highlight, but a rare one indeed. 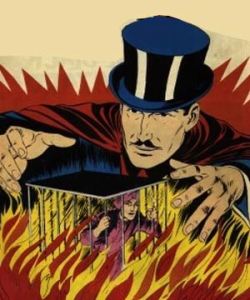 The plot of this serial is an old one and has been quite recycled in the genre. Scientist builds a device to benefit mankind and villain steals it to use as a weapon against the world. In this case, the villain is the Wasp, and in another old serial cliché, we have to guess from episode to episode which of our cast is really the Wasp in disguise. It has some good action and suspense, but suffers in comparison to today’s offerings and even to its contemporaries – Adventures of Captain Marvel being the best of the genre.

Much like the Phantom on Syfy, and Flash Gordon recently before that, Hollywood will soon be raping, um, sorry, I mean ‘re-imagining’ Mandrake for an upcoming production starring Hayden Christensen and Djimon Hounsou, possibly for the big screen. Yep, I’m already cringing. Should make this movie serial seem like gold though.

What’s So Wrong with Tradition?

As Syfy readies its newest TV mini-series/pilot based on Lee Falk’s classic Phantom, all I can think of are two questions. What’s so wrong with tradition? And if it ain’t broke, why ‘fix’ it?

There is a reason that properties that have been around for decades are so successful in their original source material. They work. And if they aren’t broke, why does Hollywood always have to ‘fix’ them? Batman doesn’t need an army surplus vehicle for a Batmobile. The X-Men don’t need black leather outfits. Flash Gordon shouldn’t be a teenager. Superman isn’t a stalker, or a deadbeat dad.

And the Phantom isn’t some kid who refuses to wear the uniform everyone before him has worn. If he doesn’t, he’s not the Phantom. If the folks at Syfy insist on doing this, why don’t they just come up with their own heroic adventure series, cuz this ain’t the Phantom.

This ‘re-imagining’ of Lee Falk’s classic Phantom comes to Syfy in 2010.

Comics artist George Tuska passed away yesterday at the age of 93. He had only just days before finally retired from doing art commissions.

Tuska’s career spanned more than six decades having done work in the Golden, Silver, Bronze and Modern Ages. One could say he might be best remembered for his work on Iron Man, but the truth is the man’s pen touched nearly every comic book character.

With his reputation as a fill-in artist, there wasn’t anyone he didn’t draw. And his regular work spanned the field from Luke Cage to the Avengers to the T.H.U.N.D.E.R. Agents to Black Goliath to the Sub-Mariner to Buck Rogers to the original Captain Marvel to Superman and the Justice League in their newspaper strip.

We have truly lost one of the great ones, he will be missed.

A reader asked me to comment on the end/pseudo-beginning of “For Better or For Worse,” so here it is.

The first time I saw Lynn Johnston’s work was in a compilation book about motherhood back in the early 1970s. I don’t know if this was before or after “For Better or For Worse” began but later I did realize it was the same woman. The one page/one panel cartoon that stood out for me from that book was one of a mother at the bathroom door, a toddler with her hand on the toilet lever, a tail -hair standing straight out on end in panic- coming from the toilet and the caption, “Bye bye, kitty.” Sick, on a “Far Side” level, but I loved it and it stayed with me.

Now, some decades later, Lynn Johnston has decided to end her FBofW strip. Sort of. The end came a few weeks back, shown here, with Johnston doing her best to epilogue all the ongoing storylines and characters. It’s rather wordy and involved, because of the soap opera-ness many have complained about in recent years. While I haven’t paid too much attention to the strip in that time, I would think that if one loved the characters, that shouldn’t have mattered. Although I guess the soap opera might have been infinitely more interesting had it been entirely autobiographical, the strip’s title taking on new meaning with her marriage falling apart in the last few years. But of course, FBofW ending fairly happily as you can see.

Now, equally controversial along with FBofW ending is the pseudo-re-start of the strip. Obviously Lynn Johnston has a writer’s heart. She’s not retiring with the strip’s end, she’s re-writing, re-vamping – a final edit if you will. Many writers wish for that once a book has gone to print, and Johnston is getting it. FBofW is starting over with Johnston tweaking it as it goes along. And I wish her best of luck. You go, Lynn! And keep flushing those kitties.

Posted in comic strips, for better or for worse, lynn johnston