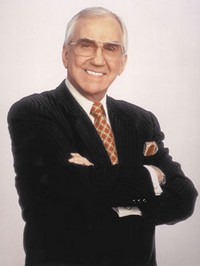 Ed MacMahon was best known to generations as Johnny Carson’s announcer and sidekick on “The Tonight Show.” For over thirty years his trademark intro of “Here’s Johnny!” was a signal that the show was about to begin, and greatness would follow. In a era of numerous talk shows, and before they became promotional tools and spotlights for trailer trash, “The Tonight Show” was the best. That might be Ed’s claim to fame, but that’s not all he did.

He was also the face of American Family Publishers sweepstakes, a frequent partner of Dick Clark’s on many TV projects and the co-host of Jerry Lewis’ annual telethon. Ed hosted “Star Search,” a series that launched the careers of Britney Spears and Arsenio Hall among others.

MacMahon also did quite a bit of acting over the years. Of specific interest to me was 1967’s The Incident, one of my favorite films. It’s a small part in an ensemble film, but Ed is excellent.

We’ve lost a legend, and he’ll be missed. Rest in peace, Ed.

Despite one of the better (or at least more interesting) commercials this year being banned from being broadcast, there were still a few ads that stood out during this year’s Super Bowl.

The main idea is to surprise, entertain, and most importantly let the viewer remember the name of the product when it’s all over. I mean everyone remembers the amazing Big Brother commercial from 1984 – but come on, who remembers what they were selling?