Disney Does It Better

I recently had a chance to visit Universal Studios in Orlando. It was my first time there after visiting Disney World almost a dozen times in the last two decades. I gotta say, I was unimpressed. Universal tries hard, but in most cases not nearly hard enough. It’s all in the attitude.

The rides are fun, but have to stand on their own because the staff just doesn’t support them. Disney characters stay in character and aid to the ‘enchantment.’ I saw a Cyberdyne employee at the Terminator 2 ride chatting with guests about the weather and agreeing with them about how the park’s hours suck. Would an evil corporate employee of an evil mega-corporation about to eradicate mankind really do that? 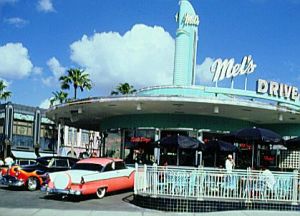 I personally engaged Doctor Emmett Brown from Back to the Future in a conversation about Kanye West’s new single and how upset he was about the closing of the Adventurers Club, and how he wished he could have “gotten that gig.” Way to break character, Doc. Doc Brown, it should be noted, now that his ride has vanished from Universal, had been exiled to a nuclear-powered tricycle in the vicinity of Mel’s Drive-In from American Graffiti. The fifties, get it? Yep, that’s about the extent of Universal’s originality.

Have you ever tried to get the guides at Disney’s Haunted Mansion to break character? Ain’t gonna happen. You’d have better luck trying to make guards at Buckingham Palace crack a smile. Disney definitely does it better.