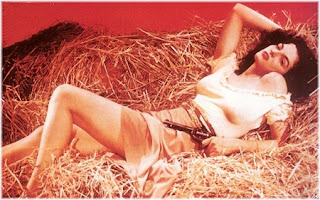 Sex symbol, actress and bra spokesperson Jane Russell passed away today of respiratory failure at her home in California. She was 89.

Jane Russell was initially discovered by Howard Hughes, not because of her acting talent, but because of her 38″ bust. Hughes financed her first film The Outlaw, made her a pin-up queen with WWII troops and the millionaire airplane designer even developed a special bra for her figure.

Russell appeared in many films over her career including Gentlemen Prefer Blondes, Gentlemen Marry Brunettes, Young Widow, The Las Vegas Story, His Kind of Woman, The Paleface and Born Losers, the biker flick that infamously introduced Tom Laughlin’s Billy Jack character to audiences around the world. Later she appeared in commercials for Playtex, promoting their ‘cross your heart’ bra.

Her later years were filled with some Broadway and charity work. We’ve lost another legend, she’ll be missed.