I am a huge Philadelphia Wings fan, I love lacrosse and I love the Wings. I’ve been a season ticket holder for nearly two decades. Now I realize that the team hasn’t won a championship in nine years but in the years before that, they nearly scored every one. There’s a long history here. The team has unfortunately fallen into that terrible losing pattern most Philadelphia sports teams get caught up in – almost to the play-offs.

I attended the home opener on Saturday and was a bit shocked by what I found. It seems the Wachovia Complex (or whatever the hell they are calling it this week) has decided to put the squeeze on the Wings. I guess no wins means no money, but this is just ridiculous. It feels like they are trying to tight-ass Major Indoor Lacrosse out of Philadelphia.

Prices have gone up, not just a little but a lot. Parking up by 30% and most of the food up by a buck. That’s not a big thing really, that’s business as usual for a sports complex, but it gets worse. Let’s start with the tickets. They didn’t send them out via snail mail so we would have real tickets – they went out via email, to save paper I suppose, and that was just the start of the cheapness.

The program which are normally thick books of articles and stats was now basically a folded over flier. They had closed off the entire upper level and turned out the lights up there. A grade school choir sang the National Anthem rather than a big or local name singer. Only the starting line-up of the team was announced as opposed to all the players participating in the game. Our mascot, Mad Dog, who had previously been stripped of his ATV a couple years back, lost his whole costume save just a dog mask. And then the kicker, not that our half-time shows have ever been all that spectacular, but – there was no half-time show!

What the hell is up, Wachovia Complex? 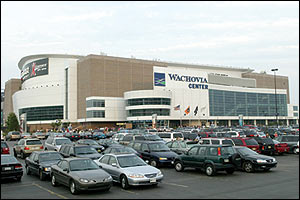 The Wings won Saturday’s game 12-8. The players gave as good as they usually do. I have no complaints in that department, at least I don’t now that Jacobs is no longer on the Wings. There could have been more fights, but then again, there could always be more fights.

From the Baltimore Sun:

NEW YORK – The National Lacrosse League canceled its 2008 season after failing to reach a labor agreement with the union.

“The plan is to take the season off and try to get with the union and negotiate a deal that works for both parties and get back playing in ’09,” NLL commissioner Jim Jennings said.

The 14-team league was scheduled to open the season Dec. 27.

“It’s devastating,” Jennings said. “We’re in a position right now where we’re just starting to build momentum with our fan base, our teams, with television and sponsors over the last four, five years. We’re not the NHL, not the NBA. This is going to cause a lot of pain to a lot of people.”