This review, in a slightly altered form, has already appeared on my pop culture blog, Welcome to Hell. Since it’s videogame topical, I figured I’d share it here too. Enjoy.

First things first, Wreck-It Ralph being a Disney/Pixar flick, we get a Pixar cartoon before the main feature. “Paperman” was a sweet short utilizing different animation than usual for Pixar, and it also had a bit of a Japanese anime vibe to it. I liked it a lot, a big reason to see this movie is to see “Paperman” first.

Wreck-It Ralph, the newest from Disney/Pixar, is loosely at first glance a cross between Toy Story and Tron. Like the first movie we discover that the entities in our videogames actually live, especially when we’re not looking, and like the second flick we discover that they live in their own little universe with its own physical and moral laws, all within the confines of one arcade.

Wreck-It Ralph is the bad guy in a game called Fix-It Felix, Jr., essentially close to Donkey Kong in many ways. Ralph, shunned by the other denizens of his game, determines to leave his game and make good. He goes off to Hero’s Duty, a hybrid of Halo and Starship Troopers, to win a medal, and recognition. When things go awry, he becomes stranded in Sugar Rush, a mix of Mario Kart and Candyland. There, Ralph must decide if truly is the bad guy, or a hero.

It’s a complex plot that is quite dark in places, but for the most part, it’s an enjoyable journey through 1980s videogame nostalgia. It has a sharp sense of humor, great characters, and the voice work of John C. Reilly, Sarah Silverman, and especially Jane Lynch is first class. There are also many cameos of classic videogame characters that make the flick a real treat.

An added trivia bonus for old school videogamers is the song that plays over the closing credits, “Wreck It, Wreck-It Ralph” by Jerry Buckner, formerly of Buckner & Garcia of “Pac-Man Fever” fame.

I liked Wreck-It Ralph quite a bit, and while I wonder if this might be over or under the heads of some folks who weren’t into, or alive for, 1980s arcade games, I highly recommend it. Great flick. 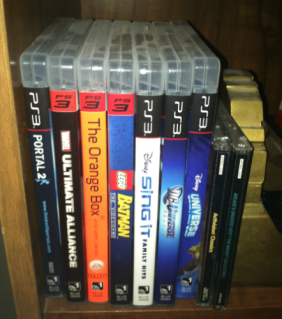 With the addition of the PlayStation 2, I felt it was time to take inventory of exactly how far down the rabbit hole The Non-Gamer has fallen since this started. The first problems were that Ray also gave me PS2 games with the PS2, then I bought a few myself. Damn you, GameStop, for liquidating your PS2 games at buy-two-get-one-free.

Of course I started this blog after the purchase of a PS3. So far we haven’t purchased many PS3 games actually. I got one of the Ultimate Alliances because I really wanted to play it. I bought DC Universe Online as soon as I learned it was going to be free to play. The Bride bought Disney Universe and Sing It, and then there are all those games Ray lent us. There have been a few other games, but for the most part we have been downloading them.

The PlayStation Network provides an amazing, ever-changing selection of demos and trial versions of games. At last count, we had over eighty games in our system, including at least a dozen we have purchased. Pain is one of my favorites to this day. Whenever I open the PlayStation Network, I will end up playing it for at least a little while, good for a bit of stress relief.

Now even though I call myself The Non-Gamer, and this blog started with the purchase of the PlayStation 3, I do own other game systems. As I’ve mentioned I bought an Atari 2600 back in the 1980s. We have almost two of the old Atari game shelves full of the little cartridges

Once we got married, one of the big deal buys we made was an old Nintendo Entertainment System along with all the bells and whistles, not to mention about thirty different games. While I love stuff like the Mario games, there is always the problem of “turn waiting.”

We also have a Super Nintendo as well, but only two games for that, Justice League Task Force and Super Godzilla. Yeah, it was a Christmas gift, and was feeding two of my peculiar obsessions. It did not get much play as no instructions came with the game system, or either of the two games.

I haven’t even thought of the dozens of games on iPhone if they count.

Wow, I guess I’m not much of a Non-Gamer after all. Now, can someone please tell me how to turn off the PlayStation 2?

So Who’s This Zelda Chick Anyway?

Nothing hits home with the admission that I am a non-gamer more than when I am confronted with stuff I don’t know, and worse yet, stuff I know I should know. Like Zelda.

The Dark Crystal recently invited me to a big orchestra event where they would be playing the music from the Legend of Zelda videogames. The inference in the invitation is first, that this was a big thing, and second, that everyone knows who Zelda is. I do not, and I felt stupid.

Even my buddy Ray had recently given me a hard time because I admitted not knowing who Zelda was. Apparently he was further incensed because it was a game even I could play. Ray was ashamed of me. I was crushed. Who was this Zelda chick, and why was she ruining my life?

I did what everyone does in this situation, I visited Google, and then Google for dummies (that’s me apparently in this case), Wikipedia. Turns out she’s not just anyone named Zelda, bitch is legend, as in The Legend of Zelda. I knew she was a Nintendo product, but I had no idea she was the star of some sixteen different games on at least a dozen different game systems. Zelda gets around.

Now here are the facts. Zelda was named after the famous Zelda Fitzgerald, wife of the even more famous F. Scott. Game designer Shigeru Miyamoto thought it was a pleasant sounding name for a princess. The game itself is based on the designer’s own experiences as a boy where he explored the hills, lakes, forests, and caves around his home.

As inferred by Crystal’s invitation to a concert, the music of The Legend of Zelda is also quite famous and distinctive. Koji Kondo, a legend in music and audio for Nintendo composed the soundtracks for much of the game series, including musical clues and cues throughout. His work can also be found in the Mario and Starfox games.

The story of the game is fairly simple, or at least I’ll dumb it down quite a bit here. You play the hero Link, and you have to quest for stuff in the land of Hyrule to rescue the princess, Zelda. Like I said, I streamlined this baby. It gets more complicated the more you get into it. Link is sorta a cross between Peter Pan and the elf from Gauntlet in appearance, and has been parodied on Cartoon Network’s “Drawn Together.” Hyrule is your typical fantasy land, and Zelda, is usually the damsel in distress, only there to be saved or served. Later versions of course are playable, and more independent.

Well now that I have a little foreknowledge, and won’t be made to feel as stupid as before, maybe I’ll play one of these games in the future…

Well, it’s time for more Sonic. No, not that Sonic, with their great shakes, burgers, fries, and onion rings, but that danged hedgehog again. When we last talked about the furry blue menace, I tried to play Sonic the Hedgehog CD and Sonic Generations. This time, I’m going to give Sonic the Hedgehog 4 a shot, or at least just Episode I as this game demo is subtitled. 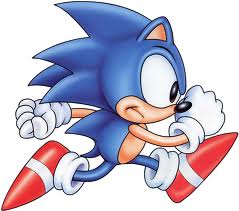 First a few words about Sonic, as I had questions last time around myself. The hedgehog was created in 1991 by Sega in hopes of designing a mascot for their games much the same as Mario was for Nintendo. Now the similarity in the games makes a little more sense, as Sonic was in essence, Sega’s Mario. He began as more round, spiky and hedgehog-like then became more humanoid and streamlined as time went on, but has always been a super-speed rolling dynamo. Sonic has starred in more than two dozen games, in multiple comic books, and in animated series where an entire mythology exists for the character. He’s bigger than I ever would have thought.

Now let’s go on to the game. Last time, I was on Green Hill, this time I started on Splash Hill, and whatever that means, I don’t know, sorry. Sonic, it should be noted, is a very impatient hedgehog. If you don’t start right away, he’ll tap his foot, look at his watch, and eventually lie down, looking annoyed the whole time. Hey, my game, my pace, bucko. But then again, maybe he’s tired of that music too. More annoyingly, he’ll do it if you stop during a game too. 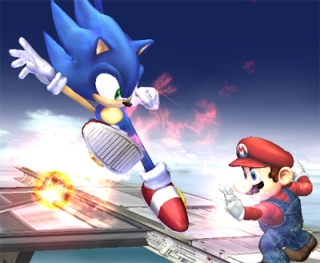 This version of the game (4) is a bit more upfront and easy to understand. As a matter of fact, this resembled the first Sonic game I played almost as much as it did Super Mario Bros. There was one difference I noticed, and again, perhaps that was the Non-Gamer playing it wrong, but Sonic seemed to be led by circumstance and situation more than Mario. It’s been a little while since I played any of the SMB games, but it always felt like I had more free will than in this Sonic game.

These Sonic games were fun for a bit, but I think I’ll leave them to my nephew from now on. Enjoy, kid!