The Amazing Spider-Man ~ I have to confess, when I first heard they were rebooting Spider-Man for film, I couldn’t believe it. As my friend Andy Burns has noted in his spoiler-free review, it was “too soon.” But alas to the Hollywood folks and their revolving teenage demographics, sadly the Sam Raimi Spider-Man trilogy may have been decades ago.

While I hated Raimi’s third Spidey movie with its pseudo emo goth Peter Parker making an ass of himself in the jazz club (I’m not even going to mention Venom), I still would have liked to have seen John Malkovich as the Vulture, Anna Hathaway as the ironically catty Felicia Hardy, and finally to see Dylan Baker portray the Lizard. It was not to be. Apparently like Joel Schumacher’s Batman and Robin, Spider-Man 3 was a franchise killer.

Hearing about the new film was one thing. I knew Andrew Garfield from the stage, and thought he looked the part, but was still unsure. When photos began to surface, it seemed there were going for a much younger demographic, and that the emo Spider-Man was going to be done seriously, not for irony or laughs. When I further heard that major characters like Mary Jane Watson and J. Jonah Jameson would not be involved, I was further repulsed. I had no interest in this film, perhaps, just because it was a superhero movie, I would eventually see it on DVD or on cable, if at all.

Then I saw the previews. The previews, both in 3D and 2D were incredible. They had found a way to take what was cutting edge technology in 2002 and blew us away with Spider-Man swinging through the streets and make it more mind-blowing. Much like a new rollercoaster or a new attraction at Walt Disney World, I had to see this flick. Emo be damned, I was on board. So much so that when The Bride suggested, on a whim, that we see the 1:45 AM showing of The Amazing Spider-Man the night before the Fourth of July, I was like aw yeah baby.

This was the full-on bells and whistles version I should note, and it has quite a bit to do with my enjoyment of the film. Counting snacks, IMAX, and 3D at an AMC Loews theater (a place regular readers know I have sworn off for the most part), this late night evening out came to well over sixty dollars. This movie had better be damned good.

Marc Webb, whose only other theatrical film is (500) Days of Summer does an amazing (pun intended) job at direction, especially when it comes to Peter Parker being a kid in high school. I dare say he may have even been bullied as well. This is a very real picture of the high school feeding frenzy hierarchy. Even though his Parker is a skateboard shredder science geek outcast, a nice updating here actually, Andrew Garfield breathes more life into the role than Tobey Maguire ever did. I honestly would not have thought that possible. Garfield also brings that smart ass Spidey personality out in a way Maguire never did. 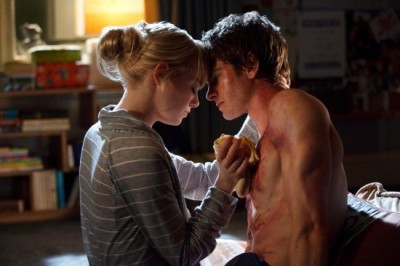 Emma Stone’s Gwen Stacy is a conundrum. At first I did not like her at all. She was sooo not Gwen Stacy. She seemed too old, she seemed too smart, she seemed, well, not poor doomed Gwen Stacy. As the movie went on, I did warm to her, and started to root for her. The movie Gwen was a different entity, and in the just over two hours I experienced her, I started to like her. And then, the script fell into the toilet. More on that later.

Rhys Ifans was a decent Curt Connors, although somehow I didn’t expect him to have that sort of accent. Maybe a southern accent being from Florida and all, but British never occurred to me. Ifans is suitably troubled as Connors but having the same well-spoken voice, clear of stereotypical but expected lisps, as the Lizard was quite a surprise. The Lizard’s maniacal super-villain turn surprised me, as its specifics didn’t seem in line with any version of the character I had seen before.

The connection between Dr. Connors and Peter’s parents, a plotline nearly promised in previews (there are posters calling this flick ‘the untold story’), is left hanging and vague, obviously hopefully waiting for sequels. With the Lizard, is where the film starts to fall apart for me. Why a lab in the sewers? How did he get all that equipment down there? We see at one point that some points in the sewers are too small for the Lizard to get through. Why are lizards attracted to him? These things are never addressed, never explained, and frankly pretty silly.

Webb’s casting of notably younger and quite famous actors as Aunt May and Uncle Ben is an interesting one, perhaps to bring the older fans in who would be alienated by the casting of Garfield and Stone, actors they might not have known. Sally Field, despite her real age still seems much too young to play Aunt May, although it must be said she does a wonderful job, everything on mark. I really have no complaints. But. She’s no Rosemary Harris.

Martin Sheen as Ben is an interesting choice. He looks the role, and I can never say ill of any performance he gives, as he’s one of my favorite actors. I thought it an interesting coincidence that both Sheen and the previous Ben, the late Cliff Robertson, had shared a role before – John F. Kennedy. Sheen is wonderful in the scenes he has, but I have one complaint, and it’s a big one. He never says “With great power comes great responsibility.” Blasphemy! That’s like telling Superman’s origin and not having Krypton explode. It’s essential.

The rest of the cast is rounded out well. Nice transformation of Flash Thompson, as played by Chris Zylka from “The Secret Circle.” I also liked Denis Leary as Captain Stacy, although he essentially plays himself throughout the movie. That could be construed as a complaint, but it’s not. I like Denis Leary, and he’s at his best when he is himself. His fate here is a bit convoluted when compared to the comics, but it is what it is.

There is much to like about this new version of the Spider-Man legend. I liked the various updates, especially in the technology. The origin is brought into the present a bit. I really liked that we have the web-shooters back despite how much the organic ones from the Raimi trilogy made more sense. I didn’t like that it seemed like he stole them from Oscorp however. Overall this was a great flick for the first hour or so. And the visuals are stunning, especially in 3D IMAX.

And then, in the third act, it crashes, hard. I’ve already mentioned my problems with the Lizard, or at least some of them. He seems to also have the same CGI dilemma that Sean Connery had in Dragonheart, he changes size and shape depending on the circumstances. Sometimes he is man-sized, and sometimes dinosaur-sized. Make up your mind and stick with it.

Gwen, likable as she is by the third act, is quite the little heroine herself. She stands up to Flash Thompson, her father, and even the Lizard, but at the end is told to ‘wait in the car,’ like a good little girl. What? What?? And then she does. Wow. That’s where that sixty dollars missing from my pocket started to hurt. 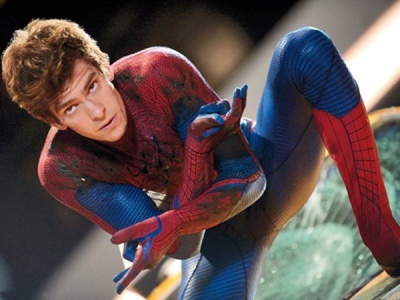 And then there is Garfield himself constantly taking off his mask. I understand the actor’s need to emote, and be seen, but let’s face it, if the role you are portraying is Spider-Man, it should be understood you will be wearing a full face mask throughout the film. If that’s not good for you – guess what? This role is not the role for you. It’s called a secret identity for a reason, Andrew.

When the crane workers of the city somehow got to their vehicles in the middle of the night, the have their cranes ready for a wounded Spider-Man to web and make his way to the Oscorp building… I was livid. How did they get through one of the largest and most populated cities on Earth to do this while it was being evacuated? And how did they know Spider-Man was going to the Oscorp building? And why couldn’t Spidey just web buildings as he usually does? It was his leg that was injured, not his arms. And if the police were on his side at that point, and they were, why couldn’t they just give him a ride with their helicopter? We do know that Stacy was going that way too.

All of the good will toward the movie was draining away at that point. Sixty dollars and an hour and a half of great movie with stunning visuals – and it falls apart in the last twenty minutes? I’m sorry, folks, but a wonderful dinner can be ruined and forgotten easily if you choke to death on the last bite.

The Amazing Spider-Man is a good movie up to a point. It’s definitely worth seeing in an Avatar to see the effects, but be prepared not to get your money’s worth with the script logic. Don’t forget to stay through the credits for a teaser for more Spidey movies. See it, but be warned.

I have nothing against teenaged superheroes. Spider-Man started as a teenager. The original X-Men were teenagers. Dick Grayson as Robin, and later Nightwing, is one of the coolest heroes around. And I do understand the psychology of the teenaged sidekick being the identification factor to the hero – but come on now, let’s get real, when you get out on the playground… everybody wants to be the Batman not Robin. That’s just the way it is. That’s why I don’t understand the new “Iron Man: Armored Adventures” cartoon coming from NickToons.

The new animated series, coming almost two years too late, is of course to cash in on the success of the Iron Man movie. It really makes me wonder how “South Park” can do such quick turnaround on a usually weekly basis to comment on current news stories, yet it takes comics years to produce a cartoon, but there it is. And the sore point is – Tony Stark is a kid, or more accurately a teenager. It kinda takes all the charm out of a character so notoriously a bastard, doesn’t it?

The second problem is that it’s done in that limited computer animation that so completely ruined MTV’s attempt at “Spider-Man” after his first movie. The animation is stiff and blocky and kinda like a combination of “Reboot” from the 1990s and “Davey and Goliath” from the 1960s. There’s flash animation online better than this honestly.

Rhodey and Pepper (and even Happy, disguised as Flash Thompson) are there as well, and are also teenagers. There’s even a teenaged Mandarin, whose father at least bares a slight resemblance to the real thing from the comics. Howard Stark, Tony’s father, is also familiar – looking like the Silver Age Tony Stark, complete with Howard Hughes’ mustache. Future episodes promise Whiplash, the Ghost, the Hulk and Fin Fang Foom – I wonder if they’ll be teenaged too?

The only real props I can give this series is for the theme song by Rooney, catchy and to the point, just like any superhero theme should be.