Total Recall ~ I thought it might be worth taking another look at this 2012 remake of the 1990 scifi classic, especially in the light of seeing Iron Man Three and Star Trek Into Darkness, as well as anticipating Man of Steel later this month. All of these films have one thing in common. Everything you think you know is wrong, here’s the new spin, enjoy the irony and the fun references to what you thought was going on.

Anyone walking into Total Recall, or any of those other flicks, is going to get what they thought they would, and that’s part if the ride. And rollercoaster ride is principally what Total Recall is. It barely ever stops from start to finish, the action is full on forward, barely giving the viewer time to catch their breath.

Those expecting star Colin Farrell to play Arnold Schwarzeneggar are to be disappointed. This flick is both a remake of the 1990 film and loosely (as loosely as the original) based on the Philip K. Dick story, “We Can Remember It for You Wholesale.” Keep in mind, the original protagonist was based on Richard Dreyfus so Farrell is not right either. As far as cast goes however, only he and antagonist, Bryan Cranston of “Breaking Bad,” really shine.

The setting is different, rather than Mars, this is set fully on Earth, even as Earth as a tunnel through the world from London to Australia features solidly. It’s still a dystopian future, and our hero still has memory issues and may not be who he thinks he is. Same s#!t, different day, if you’ll pardon the expletive.

The references are plentiful and amusing, as long as you’re not a purist to the first movie, or the story. Just sit back, turn off your brain and enjoy the ride. I loved the flying car chase, amped up unbelievably over the one in The Fifth Element, and the more original vertical/horizontal elevator chase. Bring seat belts!

And if you’re a fan of Philip K. Dick, don’t forget about the Radio Free Albemuth Kickstarter, as mentioned on this week’s GAR! Podcast.

My Life in Ruins 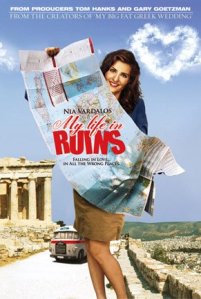 This has been a good summer for movies so far, between Up and now My Life in Ruins, things are definitely looking ‘up.’

Nia Vardalos, of My Big Fat Greek Wedding and Connie and Carla, returns to the screen with this tale of Georgia, an uptight history professor who ends up as a tourguide in Greece when the teaching job dries up. One particular tour changes her life and hilarity ensues. This is a delightful romantic comedy that the star and cast, including Richard Dreyfuss as well as Rachel Dratch and Harland Williams, effortlessly bring to life.

In a summer also littered with slob comedies and angry robots, this is a breath of fresh air, a fun flick, highly recommended.