With an impending birthday coming this week, after watching the opening number of this year’s MTV VMAs, I had to ask myself two questions. Or rather one question with a choice. Am I old, or has Miley Cyrus lost her mind?

I am concerned for her well being honestly. The woman is clearly out of control, if not under the influence of drugs or alcohol, or just plain stupidity. If she was a close friend, or a member of our families – you know damned straight she’d be long overdue for an intervention. 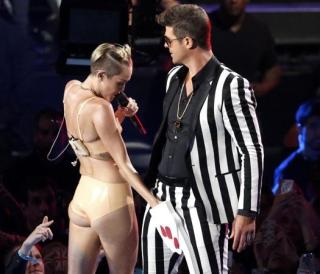 Yeah, and there it is. It’s not like the VMAs don’t have a reputation for controversy. I remember quite clearly as a young man seeing Madonna hump the floor in a bridal gown while singing “Like a Virgin.” I will never forget that as long as I live. Later shows have tried to recreate or top that moment, but rarely succeeding. It may be time for MTV to stop trying to do that, and just do an awards show. The Oscars and the Tonys have both shown in recent years that ‘just an awards show’ can actually be quite good.

What bothers me most about the Miley Cyrus performance at the VMAs is that no one stopped it, no one pulled her aside and said No. Even Robin Thicke, especially co-conspirator Robin Thicke should have known better. Lady GaGa is outrageous. Madonna is outrageous. But poor Miley just made us feel embarrassed and worried for her.

Outrageous, unique, and controversial are something to aspire to in the entertainment industry, but this was just a freak show, and pitiful and shocking for most of us to watch. And I’m sure Will Smith and his family agrees with me.