What Ever Happened to Baby Jane?

What Ever Happened to Baby Jane? ~ This 1962 campy horror classic from director Robert Aldrich is immortal in the annals of Hollywood. It’s been quoted, parodied (my fave a bit for the MTV Video Awards with Madonna and Courtney Love), remade (one with the Redgrave sisters in 1991, best avoided), shown in revival houses for decades, re-enacted on stage, and is the only pairing of two of the greatest and most infamous Oscar-winning actresses of all time. This film is legend.

Rumors of a Joan Crawford/Bette Davis feud had been fueled for decades by publicists and tabloid journalists so this feature with both of them, in antagonistic roles made for lots of press, even with both actresses in the twilight of their careers. Both had been making B-grade horror flicks of a fashion so a teaming in this manner seemed right. And additionally, both women had a reputation for sometimes taking roles over the top, so a story in which over the top was the rule was indeed perfect. 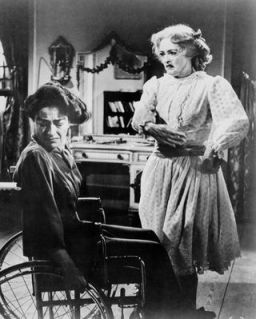 In the film, alcoholic former child actress Jane Hudson takes care of her paraplegic celebrated actress sister Blanche Hudson. Jane does so because she believes she’s the one who crippled her sister in a long ago accident that ended both their careers. Now years later with the advent of television, Blanche’s movies are getting a bit of a revival, causing jealousy and insanity in Jane. The fun and campy horror only begins there.

Despite the over the top acting of both ladies, it is Bette that rises to the top as the superior actress. While Joan just does a parody of her best melodramatic roles, Bette rocks the screen with what could be camp, but more often than not shows as true performance as a woman snapping from a psychotic break.

Of course, despite the two women involved, the point is not the acting, but the fun of these two trapped on the same screen. This is almost as good as Dracula vs. Frankenstein or King Kong vs. Godzilla. Sometimes Joan’s passive/aggressive technique is every bit as nasty as Bette’s straight out hostility. Truly a battle of giants, this is a fight that must be seen. 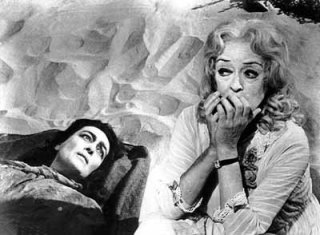 Victor Buono stands out from the rest of the small cast, spotlighting his mild-mannered persona as opposed to his frequently seen villainous side. Director Robert Aldritch wisely chose, at Bette Davis’ insistence, that the film be shot in black and white, adding to the horrific atmosphere.

What Ever Happened to Baby Jane?, for both good and bad, is one of my favorite movies. I love it as the quirky horror it was meant to be, and I also love it as the camp comedy it has become over the years. It is my second favorite to MST3K to after The Rocky Horror Picture Show and before the also Joan Crawford themed Mommy Dearest. I love it, and watch it whenever I see that it’s on. Recommended. 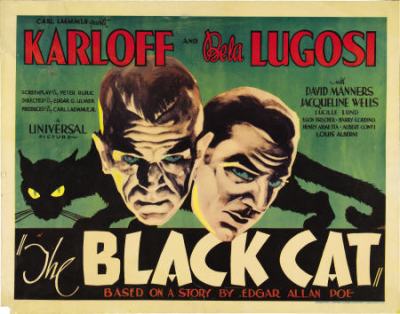 The Black Cat ~ This 1934 film, ignoring the many others that use the same title (there have to be at least eight that I can think of, right off the top of my head), is the first onscreen meeting between Universal horror stars Bela Lugosi and Boris Karloff, the first of eight Universal horrors to feature them both.

In a futuristic mansion built on the site of a World War I fortress, the two rivals engage in a battle of wits, chess (yes, chess), and torture, both physical and psychological. Caught in the middle are a newlywed couple, dropped into the conflict with circumstances almost hilariously similar to Brad and Janet’s in The Rocky Horror Picture Show. And much like that film, horror and hilarity ensues, but without the musical numbers. Apparently, Boris tortured Bela on this site during the war, and Bela is back for vengeance. The houseguests, among others, are pawns in this game of cat and mouse.

Boris Karloff’s Hjalmar Poelzig is a subtly sinister Satan-worshipping priest in the style of Aleister Crowley, but with the fashion sense of the wicked queen from Snow White and the Huntsman. It truly is a contest of ‘what will he wear next?’ in this flick. His height, and his physical presence, are much scarier than his calm demeanor, and the effect, for me at least, makes him seem even more frightening here than in his Frankenstein roles.

Bela Lugosi makes a worthy opponent for Karloff here as Dr. Vitus Werdegast. Bela, more so than any other role I’ve seen him in, puts in a fabulous performance. In fact, he steals the film. I have always thought him to be an over-actor, relying on his accent to excuse him from any real work, but here he is really quite good. I was impressed.

Also starring in this Universal horror is the house and stage set itself. Art deco was very popular in the 1930s and it was made into a starring character as the backdrop here. As the drama unwinds, even in the slow parts, one cannot help but marvel at the very expensive (for then) sets, a relic of a lost time in architecture.

The film itself is supposedly based on the Edgar Allan Poe story of the same name, or at least it is, according to the credits. Director Edgar G. Ulmer later admitted in an interview they used the title to get publicity for the movie. It should be mentioned this flick was quite violent for the time, went through several cuts, and was even banned in certain European countries. While the most successful Universal film of that year, this has become a mostly forgotten film, but definitely worth a watch for horror fans and film fans alike.

Surge of Power: The Stuff of Heroes ~ This campy comedic superhero film is badly acted and directed, in an almost unintended Rocky Horror or Lost Skeleton of Cadavra way, but its script and heart are in the right place. If you rent it, stay with it. The most intriguing part of the flick is its gay-centric cast and community, a trick that really works well, and doesn’t overpower the rest of the movie. Look for fun cameos by Noel Neill, Lou Ferrigno and Nichelle Nichols as well as Marv Wolfman and Len Wein. Tom Tangen is hilarious as multiple characters, writer Vincent J. Roth is charming in the title role, and do not miss the costume party. This is a lot more fun than it at first seems, check it out.

Empire Records ~ This cult favorite pseudo-remake of FM, only at a record store instead of a radio station, is a pleasant surprise. While painfully predictable, it’s also a lot of fun and has a killer soundtrack. Great Gwar cameo and bonus, Renee Zellweger not only sings, but her eyes are open for most of the movie.

Pirate Radio ~ Great sixties soundtrack, but wow, not a great movie at all. It also has a terrific cast, most of which is wasted here. I think this is the first Richard Curtis flick that I haven’t liked. I guess everyone misses sometimes.

Franklyn ~ Really? Darkman meets Dark City with just a touch of Repo! The Genetic Opera thrown in for good measure – really? This is what you were shooting for? This is pretty, this is stunning, but it is very much style over substance. There were whole sequences that were so boring that I fell asleep. It’s a steampunk Tim Burton wannabe visual overdose without much story to support it. Eye candy, but that’s all.

Killers ~ This one was quite a surprise for me. I was fully expecting a mindless romantic comedy here. I don’t like Ashton Kutcher and as I don’t watch “Grey’s Anatomy,” I have no point of reference for Katherine Heigl. She was painfully adequate for 27 Dresses but that called for that type of performance. But Killers, other than being a bit more predictable than I would have liked plotwise, is a lot of fun. I really enjoyed this romantic dark comedy with a twist. And director Robert Luketic should definitely be plugged in to work on the Bond films because he has the eye needed. Recommended.

S. Darko ~ Foregoing the whole how-dare-you-make-a-sequel mess surrounding this film, I need to stress how boring this was at the start. I literally started to doze off before the Whale song during the party woke me up. And my first reaction was – is this a different movie? Nope, it got boring again real quick.

Probably the most offensive thing about this movie is that it seeks to answer questions from the first film that really didn’t need to be answered. Some things should remain vague and mysterious.

In my opinion, S. Darko, subtitled unfortunately ‘a Donnie Darko story,’ suffers from Shock Treatment-it is. It’s one thing to make a film and have it achieve cult status, but it’s something else entirely to set out to make a cult film. It just doesn’t work like that. You cannot create cult status, it just happens. And I guarantee it’s not going to happen with S. Darko. And no amount of teen angst or Johnny Depp look-alikes can make it happen. Even Frank can’t save this one.

Movies I’ve watched or re-watched this month include: The Avengers, The Rocky Horror Picture Show, Bill Cosby: Himself, Mystery Men, In His Life: The John Lennon Story, X-Men: The Last Stand, The Devil’s Rejects, Dementia 13, Janis, Up Up and Away, Silent Hill, Drop Dead Gorgeous, Superman Returns, Boa, The Blues Brothers, West Side Story, Mask of the Avenger, Shaun of the Dead, I Want Someone to Eat Cheese With, Crime Unleashed, Memoirs of an Invisible Man, The Taking of Pelham One Two Three, The Great Race, Rollerball (1975), Shopgirl, The U.S. vs. John Lennon, Dark City, Moog, Josie and the Pussycats, Portrait of an Assassin, Office Space, Hostel, 3:10 to Yuma (1957), Forbidden Zone, Come On Get Happy, Apt Pupil, World Trade Center and A Simple Plan.

The only foray to the theatre this month was to see friends perform to Rocky Horror, so really no theatre flicks this time out. Insomnia had me raiding OnDemand again, and Showtime’s free preview this past weekend (Yay! Dexter!) offered up some new choices as well.

Flicks to add to the list of movies I’ll watch whenever they are on TV: Office Space, Josie and the Pussycats, West Side Story and Shaun of the Dead. Mystery Men would be added to my wife’s list, I just happen to be in the room.

Among the best this month (that I had seen for the first time) would be slim pickings with Shopgirl, I Want Someone to Eat Cheese With and World Trade Center.