Well, it’s time for more Sonic. No, not that Sonic, with their great shakes, burgers, fries, and onion rings, but that danged hedgehog again. When we last talked about the furry blue menace, I tried to play Sonic the Hedgehog CD and Sonic Generations. This time, I’m going to give Sonic the Hedgehog 4 a shot, or at least just Episode I as this game demo is subtitled.

First a few words about Sonic, as I had questions last time around myself. The hedgehog was created in 1991 by Sega in hopes of designing a mascot for their games much the same as Mario was for Nintendo. Now the similarity in the games makes a little more sense, as Sonic was in essence, Sega’s Mario. He began as more round, spiky and hedgehog-like then became more humanoid and streamlined as time went on, but has always been a super-speed rolling dynamo. Sonic has starred in more than two dozen games, in multiple comic books, and in animated series where an entire mythology exists for the character. He’s bigger than I ever would have thought.

Now let’s go on to the game. Last time, I was on Green Hill, this time I started on Splash Hill, and whatever that means, I don’t know, sorry. Sonic, it should be noted, is a very impatient hedgehog. If you don’t start right away, he’ll tap his foot, look at his watch, and eventually lie down, looking annoyed the whole time. Hey, my game, my pace, bucko. But then again, maybe he’s tired of that music too. More annoyingly, he’ll do it if you stop during a game too.

This version of the game (4) is a bit more upfront and easy to understand. As a matter of fact, this resembled the first Sonic game I played almost as much as it did Super Mario Bros. There was one difference I noticed, and again, perhaps that was the Non-Gamer playing it wrong, but Sonic seemed to be led by circumstance and situation more than Mario. It’s been a little while since I played any of the SMB games, but it always felt like I had more free will than in this Sonic game.

These Sonic games were fun for a bit, but I think I’ll leave them to my nephew from now on. Enjoy, kid!

The last time my nephew Ben visited we showed him the PS3. Bless his six year old heart, the kid was mesmerized. Unfortunately as we soon realized, we didn’t really have any games that he could play – or would be appropriate to play that his parents wouldn’t kill us over.

So, the next time I was cruising through the PlayStation Store looking for free demos, I downloaded all the Sonic games I could find. Sonic is huge, not just out in the world and at my local comic shop, but also in my nephew’s household. Bingo, if the ‘rents let him watch Sonic, of course they’d let him play it, right?

I snagged Sonic the Hedgehog CD, Sonic Generations, and Sonic the Hedgehog 4. The next time Ben came over, he loved it, and played for hours, seemingly grasping the controllers, the rules, the physics, the worlds, all that stuff. The more I watched this six year old, the more I marveled at his mad skillz, and the older I felt, because he was doing so much that I was incapable of in 90% of the PS3 games I’ve attempted. But that’s beside the point.

My initial problem with Sonic is that he’s a hedgehog. I’ve seen hedgehogs, and neither are they blue nor fast. They’re actually fat, flat and quite slow mammals. This seems an unlikely model for the videogame superstar, but maybe there’s something clever and snarky I’m missing out on. I knew one thing, sadly, this hedgehog had nothing to do with Sonic Drive-In. 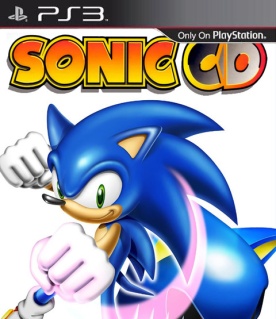 I tried the first one, Sonic CD, and was mildly surprised. There was a fun animated intro sequence that I kinda dug. It made me wonder if there was a Sonic cartoon. It took me a few times, but eventually I got it. It’s a lot like Super Mario Bros. for the NES, only with different stuff, but the same patterns. You had to know the world, and know what’s coming, to get through it. Unfortunately it was only one level, being a demo, but I think I could have gone further, and for me, that’s saying a lot. It was fun too.

I tried Sonic Generations next. I was wary of this one because ray had characterized it as being my speed. That’s never a good sign when he says that. The point of this game is that you get to play the different Sonics as they have evolved over the years. I’ll admit I’m dumbfounded. Years? Sonic has been around long enough to have different incarnations, really? Wow, it took the Justice Society almost thirty years to get a second generation… 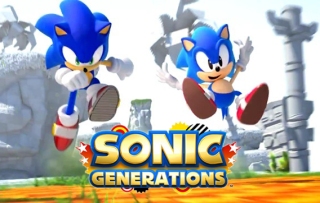 The game demo gave me the options of exploring Green Hill, which I’m guessing is from an earlier game, re-imagined with high definition graphics, or see it in an entirely new perspective. Seeing as how I have played little to no Sonic so far, it’s all new to me. I tried the first, and despite the little critter circling me and trying to help (kinda like the annoying paper clip man in Microsoft Word), I managed to get through. I think I might like the original Sonic game based on this, because for me, all the HD 3D stuff did was distract me.

The second version was almost like a first person shooter, um, uh, runner and jumper. You’re behind Sonic as he does his stuff and facing forward. This looked cooler, and was even a bit acrophobic in places and probably not good for folks with motion sickness. I didn’t do well with this one, but I wouldn’t mind watching someone else play this one.

Well, that’s enough Sonic for now, I’m all Sonicked out. Maybe I’ll talk about Sonic 4 next time. I’m off hedgehogs for the moment, especially when they make me dizzy.

Infuriated by not being able to figure out Portal, let alone any of the games on The Orange Box, I wanted something simple. I wanted to shoot something, or smash something. Smash something… hmmm… the lightbulb over my head went off as I knew I had Sega’s The Incredible Hulk in that stack of videogames Ray had lent me. That’s simple, that’s all about smashing. Yeah, baby, Hulk smash!

From viewing the intro, the game is very much based on the 2008 film of the same name. There’s Tim Roth as the Abomination, and other lookalike actors in their roles. It’s all in place, but at its roots, it is still a Hulk smash game. Or at least it should be.

I got to playing and started smashing and smashing and smashing. But it seemed to be the same old army guys I was smashing and ditto with the walls and vehicles and other various smashables. I soon found that I, as the Hulk, was essentially trapped inside one building. There was some smarts involved in getting out. After a while of trying to jump out, jumping being the Hulk’s default flying power, I started getting frustrated.

I mean, this is the Hulk we’re talking about, right? Come on, Sega, the Hulk, like Winnie the Pooh, is a monster of very little brain. He should not be forced to puzzle his way out of situations, especially in videogames. His battle cry is “Hulk Smash!” not “Hulk put on thinking cap and figure this thing out.”

I was kinda disappointed in Sega’s The Incredible Hulk. I may go back to it, but not for a while. In the meantime I will quench my thirst for destruction with Grand Theft Auto: Chinatown Wars and turn the PS3 off for now.