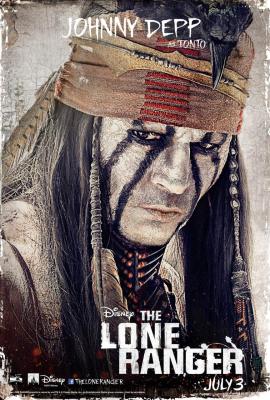 The Lone Ranger ~ When the film was over I turned to The Bride and said that if Walt Disney was alive and found out his company had obtained the rights to make a Lone Ranger movie he would be so happy, and if he’d seen what his company had done with it – it would kill him.

I have a long association with the Lone Ranger, although I can’t remember where it began. I recall the cartoons of the 1960s by Format Films. The Ranger wasn’t quite a superhero, but the bizarre Ralph Bakshi meets “The Wild Wild West” style of these shorts mesmerized me. I also remember being introduced to the radio show at an early age, and seeing Clayton Moore in reruns of the 1950s series. And when I learned that he was related to the Green Hornet, to me, that just made the Lone Ranger even cooler.

In the superhero movie boom (a firecracker compared to recent decades) of the 1970s, they tried badly to put the masked man up on the big screen, but that ended horrifically with the mess known as The Legend of the Lone Ranger. That dud, along with the bad publicity of not allowing Clayton Moore to wear the mask in public, was enough to bury the character for years to come.

This 2013 movie production, starring Johnny Depp as a mentally ill, delusional Tonto, along with Jerry Bruckheimer and Gore Verbinski, his behind the scenes pals from the Pirates of the Caribbean films, just seems like a bunch of guys got drunk, had money to burn, and decided to ‘play’ Lone Ranger. And the kid who had all the toys wanted to play Tonto as an idiot.

I’m sorry. I just can’t abide this rape and mutilation of beloved childhood characters. First, we are meant to sit through another longwinded origin story. Let’s get this straight, if an origin story can be told in two sentences or less – we don’t need to see it. Just say it, and get on with the movie’s story. This is one of my biggest pet peeves with superhero films. Stop wasting time with origin stories. Superman’s origin was told in seconds at the beginning of every episode of the George Reeves TV series. DC Comics of the 1970s featured a one paragraph origin of the title hero on the first page of every issue. Let’s go back to that.

I can’t understand the premise of making this movie honestly. Was the point to destroy a lot of trains and ruin childhood heroes? Poor Armie Hammer is given very little to do, hardly any of it heroic, as the title character. What he does do is kill, which is something the real Lone Ranger would never do. The writers made Butch Cavendish into a cannibal, and not subtly either. I personally thought this should have had an R rating, just for that. 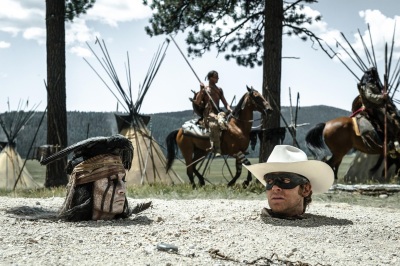 The only thing worse than Butch’s cannibalism would be the way Johnny Depp chews up scenes and spits them out like steaming vomit. Taking his character cues from Kirby Sattler’s painting, “I Am Crow” rather than the character Tonto, Depp is unforgivable. From his halting stereotypical speech to the dead bird on his head, his Tonto is an absolute disgrace.

I hated this movie, and I hated even more that my childhood heroes were destroyed in the making of it. I will get through it. There are still the movies, TV series, cartoons, and especially the radio shows to preserve the legacy. I will survive this travesty, but will the Lone Ranger?