Snow White and the Huntsman

Snow White and the Huntsman ~ I was really unsure what to expect when I went to see this flick. What I did not expect was to be one of the few males in the audience. Much like when I saw Wolverine, this was a chick flick judging by the audience. I don’t want to be sexist, but I’m guessing it was all about Chris Hemsworth, especially based on the number of negative comments I heard leaving the theater by women angry that he did not take his shirt off. He was pretty good in the film although he didn’t really have much to do with Charlize Theron and Kristen Stewart eating up the scenery the way they did. 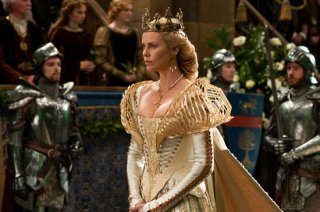 Theron rocks the house as Ravenna the Evil Queen in this reimagining of the Snow White story. This is her film, no doubt, even though it really should be Stewart’s or Hemsworth’s. And I know it’s early, but wait until Oscar time, I think we’ll see a nod for costumes and make-up for this flick. Charlize wears some outfits in this flick, she’s like Cher from hell. I loved it. 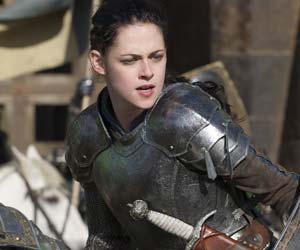 Kristen Stewart is a major problem for me here. She’s never impressed me, even in the Twilight flicks where she is supposed to rule. My major problem here? The whole idea of the Queen asking the mirror who the prettiest, and the mirror picking Snow White over the Evil Queen. I don’t buy it even for a second. I’m not being subjective here, but there is just no way Stewart beats Theron in this movie in the looks department. It’s just not believable. 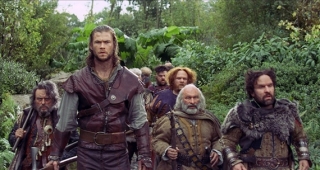 I liked the dwarves, in that they were played by well-known actors. Cool to see Nick Frost, Bob Hoskins, Ian McShane, and Toby Jones among them. They were CGIed into dwarven bodies a la Lord of the Rings, which some of this movie resembles, and not in a good way. On the other hand, part of me kinda wishes however they would have gone with little people actors like they did in Mirror Mirror than doing it this way. Seems like they’re putting little people out of work, and in a worse light, it kinda feels like white folks putting on black face, ya know?

There are a great many things to enjoy about this film. One of them is the dark forest which is scarier by far than any depiction of any dark forest I’ve seen cinematically ever. And of course I loved the song over the closing credits, “Breath of Life” by Florence + The Machine, for once a perfect song matched to a flick.

But then there are things that infuriate me as well, like the loose ends and unanswered questions, regarding the troll and the mirror for instance. There was more to tell, perhaps we’ll see it in the deleted scenes of the DVD maybe. I also disliked the big LotR battle at the end, this didn’t seem to be that kind of movie. And that’s the problem, I don’t think the folks behind the scenes knew what kind of movie they wanted to make.

In the end, it’s visually stunning, but otherwise meh. Definitely worth seeing, but maybe more worth waiting for video release or OnDemand.

Movies ~ I tried to limit this list to movies that came out in 2010 as opposed to movies that I had first seen in 2010. If it were the latter, I would definitely include things like Suck, Gran Torino, Whip It, Big Fan, Me and Orson Welles and the best flick I saw this year, which is in fact from 1999 – Cradle Will Rock.

Nevertheless, here’s my top ten or so (fourteen actually) for 2010: Julie & Julia, HBO’s multiple Emmy Award winning Temple Grandin, The Sorcerer’s Apprentice, Despicable Me, the Danish version of The Girl with the Dragon Tattoo, Shutter Island, The Promise: The Making of Darkness on the Edge of Town, should-be Oscar contender Secretariat, the surprising Megamind, the equally surprising Hot Tub Time Machine, The Runaways, Tangled, from the Cartoon Network Firebreather, and my favorite film of the year Scott Pilgrim Vs. the World

Among the worst I saw this year, again, of those movies that came out this year, would be Dinocroc Vs. Supergator, Street Fighter: The Legend of Chun-Li and the second and third installments of The Twilight Saga.

Television ~ My favorites on the TV this year are pretty predictable, sadly enough, but at least there’s a quorum. The top three for me are obviously “Mad Men,” “The Walking Dead,” and “Boardwalk Empire,” that’s easy. I was also a sucker for “Doctor Who,” “Misfits” and “Castle” this year, caught on to the amazing “Spartacus: Blood and Sand” better late than never, and I got my comic book geek groove on with “The Avengers: Earth’s Mightiest Heroes.”

Still hanging in there with my favorites, but a bit on the decline in quality would be “Chuck,” “Glee,” “Entourage,” “True Blood” and as much as I hate to say this, “Dexter.” Here’s hoping they improve in coming seasons. This is not to say these are bad series, mind you, they are all head and shoulders above most of the stuff out there.

Music ~ While I was still riding high with Lady GaGa and “Glee” from 2009, 2010 will go down as the year I discovered nerdcore. I spent a lot of my time listening to MC Frontalot, MC Chris, Beefy, Schaffer the Darklord and especially Adam WarRock. As a matter of fact, “The War for Infinity” and the West Coast Avengers Mixtape from Adam were among my favorite albums of the year. Also in there I would put “Something for Everybody” by DEVO and just to make it an even nostalgic choice, the just released “All You Need Is Now” by Duran Duran. I also kinda dug the soundtrack to “Spartacus: Blood and Sand” by Joseph LoDuca.

Songs that I loved this year would have to include that song by Cee Lo Green, edited or unedited version, it was great. The Human League had a nice comeback with “Night People,” I also liked some stuff by Arcade Fire, Ke$sha and Florence + the Machine, but my real favorite of 2010, for both all the wrong and right reasons would have to be “Miracles” by ICP.

Everything Else ~ My favorite books this year were “Pandemonium” by Daryl Gregory and “Heart-Shaped Box” and “20th Century Ghosts” by Joe Hill. Comics by Paul Cornell, Gail Simone and Jim McCann were the best this year. My favorite podcasts included “Tom Vs. Aquaman” and the excellent “Better in the Dark.” My favorite blogs included “The Age of Reasonable Doubt” by Fran Metzman and “The Aquaman Shrine” by Rob Kelly.

Perhaps my not-so-like (I won’t call it dislike, because I really do like this show) of this season’s “True Blood” comes from the lack of use of the original cast and the sudden overuse of the new characters.

Sookie, Bill, Sam, Eric, Tara and even Sookie’s idiot brother Jason all have lots more to tell us and have explored, yet the bulk of the screen time this season, especially the exciting screen time, seems to be given to the likes of Alcide, Lorena, Franklin, Sam’s family, the King of Mississippi, Kitch, etc. Granted, I like all the new additions, but the reason I started watching the show, and the reason I remain, is the main, original, cast. One has to ask, do the original characters still have power for the writers? And if not, why not?

All that said, this episode was a slight improvement over the first few. Maybe like many of the other HBO series, it takes some time to get rolling, and perhaps “True Blood” was just lucky the first two seasons and immune from HBO-itis.

The give and take between Sookie and Bill and Sookie and Alcide feels like either an ironic or sarcastic, but definitely deliberate parody of what’s going on in theatres with Twilight right now. Amusing it may be, I would still rather not have that parallel so painfully paraded. Let’s put it this way – with this comparison so evident, it’s almost impossible to get new folks interested in the series because of the negative connotation Twilight has with older audiences. It might be an inside joke that tickling the heck out of a small handful of folks, but it’s detrimental to the growth of “True Blood” in the long run I think.

Some observations about “9 Crimes”… it was nice to see inside Kenya’s brain if only for a few seconds. I hope we see more of it. The conversation between Bill and King Russell Edgington was fascinating. Nice to see how our world is affecting vampire society instead of the other way around. No one escapes the IRS. The Postmortum, a brief police interrogation video, does this as well, giving a sweet glimpse inside the vampire civilization. This is also something I’d like to see more of.

Other tidbits I liked included the Goody Osburn reference, props to the writers on that one. I loved Sookie’s imitation of the evil Sandy at the end of Grease. And is it just my imagination or does the “True Blood” casting department have a preference for redheads? Not that I mind of course. I also liked how the closing song, “9 Crimes” by Damien Rice, plays so well with the themes of the episode. It’s this kind of attention to music that sets this show apart.

That’s quite a cliffhanger this week, eh? Dogpile on the Sookie, can’t wait to see what happens next. So, until next time, ponder this, why would William Shakespeare steal spoons?