Traffic in Souls ~ This 1913 silent was also known as While New York Sleeps: A Photodrama of Today. Written and produced by George Loane Tucker (best known for his later film, The Miracle Man), it was also called in Hollywood circles ‘Tucker’s folly,’ as he tried for years to get the film made.

Traffic in Souls is about the slave trade in the early 20th century, something that tragically still goes on today. Tucker sought to develop a drama that would simultaneously entertain and inform audiences of this horrid crime. Rumor had it at the time it was based on a government report, but this wasn’t true, although that didn’t keep folks from seeing the picture. Hype worked the same way a century ago as it does today. 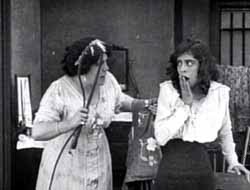 I finally got to see this flick on TCM’s terrific “Silent Sunday Nights.” It is a tale of two upstanding Swedish immigrant women, played by Jane Gail and Ethel Grandin, one of whom is swept away by deceptive men into prostitution and worse. Matt Moore is also very good here, and it might be why his career stretched beyond this film.

It’s one of the first feature films from Universal, one of their first hits, and did what Tucker intended, alerted audiences to the horrors of human trafficking at the time. Great scenes of New York of the time, and worth a look for silent film lovers.