Epic ~ The previews for this flick made it look amazing, with a stunning sense of wonder and discovery. They showed a young girl suddenly discovering a whole new world right under her nose, a battle between good and evil fought by tiny leaf men two inches tall.

You see the leaf men immediately in the movie. I couldn’t help but think this movie might have fared better under a veil if secrecy, sort of like what Disney did with Brave. Let the audience experience the sense of wonder and discovery along with our protagonist, like The Wizard of Oz, allow the magic to be seen simultaneously through the heroine’s and audience’s eyes.

That aside, the film has a stunning voice cast, including Colin Farrell, Christoph Waltz, Steven Tyler, Amanda Seyfried, Chris O’Dowd, Beyonce, and Pitbull, all putting in great performances. I was really blown away by the voice work, in some portions of the movie, keeping it afloat where the story was failing.

Speak of the devil, the story was horribly predictable and telegraphed early on. Again, this is something else that might have been helped by holding back some in the previews. I was also saddened by a less than memorable score by Danny Elfman, that made me wonder if the man has list his touch.

The Bride and I saw this opening night in 2D as opposed to 3D, hoping to save a few bucks. It appeared flat and fuzzy, and I was assured there were no projection problems. I thought it looked drab, compared to previews (in 3D) I had seen. Perhaps this is one of those films, like Life of Pi, that just needs to be seen in 3D.

All in all, this is a good flick for the little kids, although I wish there hadn’t been so many in the ten o’clock showing we were at. You’re better off waiting for the home release however.

Oz the Great and Powerful

Oz the Great and Powerful ~ Let’s see, what the rules again? Wait an hour after eating before swimming. Don’t get involved in a land war in Asia. You can’t put too much water in a nuclear reactor. Don’t pull on Superman’s cape. And never make sequels (or prequels) to beloved classic films.

I saw this movie weeks ago, weeks and weeks ago. I am still conflicted over whether I liked it or not. It was the second film I saw at the new Marlton 8 theater so the accommodations were fantastic, I couldn’t have been more comfortable had I been in my own home. But why did I have, still have such a problem with it?

Oz is a beautiful film. It takes full advantage of CGI and the 3D effects available to the cutting edge of that technology. Here, we have an Oz that both boggles the mind, but brings L. Frank Baum’s imagination to life. It is fantastic, and gorgeous. Props to director Sam Raimi for bringing the unimaginable to our eyes. 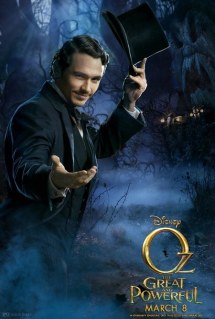 The casting, especially that of James Franco and Mila Kunis, while problematic, is fitting. Franco is smarmy, and perpetually playing (or maybe living) the part he played in “Freaks and Geeks.” He is a stoner, and even here, as the eventual wizard of Oz, if he took a second to take a toke, I don’t think anyone would bat an eye. This time, it works for the part, because his character is a slimy sort, not to say stoners are slimy, but Franco’s is. Bottom line, he’s believable.

Kunis, in my mind, has never grown from her role in “That ’70s Show.” Oh, she’s been good in stuff, and been quite believable, but like Keanu Reeves saying “Whoa,” she is always a second away from breaking character and waiting for the canned laughter after a sitcom punchline. I just can’t shake it. Here, she completely fits as pre- and post-Wicked Witch of the West, and is awesome in her passive-aggressive power hungry and clingy psycho ex-girlfriend role. Zach Braff, a traditionally sitcom actor on the other hand is equally awesome as the comedy relief flying monkey, a true highlight of the film.

Sounds like I liked the flick, doesn’t it? The problem comes with its prequel status. It tries so hard to emulate MGM’s classic The Wizard of Oz. All of the cues are there, except for the music of course. It begins in black and white and goes to color after the twister. There are numerous winks and nods to the original film. And every time it happens, I got a strong “Santa Claus Is Coming to Town” vibe.

Remember the Rankin/Bass Christmas special “Santa Claus Is Coming to Town”? Fred Astaire plays a mailman telling a group of children the secret origins of ol’ Kris Kringle. Every time he hits a prime power point of his origin, one of the kids says, “That’s why he comes on Christmas Eve” or “That’s where the flying reindeer came from.” That what happens in Oz, and every time we see the hints to the Scarecrow, the Tin Man, the Cowardly Lion, the glowing head illusion, etc. it pulls us out of the story.

If it wasn’t for those little nudge-nudge-wink-wink moments, this would be a great flick, as great as the underrated sequel, Return to Oz of a few years back. And that’s why I’m so conflicted. I liked it, but then again, I didn’t. It’s still in theaters, so definitely give it a viewing for yourself, and see what you think.

Sucker Punch ~ At first glance, and from previews, this appears to be an explosion of imagination. Writer/director Zack Snyder makes it seem as if he has constructed a film around the concept that with motion capture, green screen and CGI nothing is impossible. I mean, come on, you can’t get any more genre chill than hot chick samurais and steampunk Nazi zombies. And at first glance, you might be right.

The problem is that only about twenty minutes of the film’s one hundred and ten minutes takes place in the hyper-reality of the story’s fantasy world. The rest happens in a dreary, depressing and relentlessly violent mental hospital reality that makes the end of One Flew Over the Cuckoo’s Nest seem like a house party. Nothing good happens in the hospital. It is painful to sit through, even worse if you watch. In the theater, I hated this majority of the flick, and at home, fast forward was my friend.

The fantasy scenes are amazing, truly stunning – I could watch them over and over again – and alone well worth the price of admission/rental. The sexy actresses and killer soundtrack are also formidable as well. I fully recommend the movie just for those reasons, but there’s a lot more going on.

On further viewings and discussions with other film fans I have discovered a whole different level to this flick. Pay close attention to the dialogue and the visuals as well, as everything is a metaphor. If you don’t want to get that deep, there is also the Pink Floyd factor. Much like The Wizard of Oz, if you play Dark Side of the Moon parallel to watching Sucker Punch, it lines up much the same way.

So no matter how you watch Sucker Punch, I recommend you give it a second chance, finger on the fast forward button or not.

Lost Hits of the New Wave #4

“Hello Again” by The Cars.

The Cars were at the start of the New Wave but this entry, the fourth single from “Heartbeat City,” comes from late in 1984, well after the MTV video revolution. In fact, at this time, Ric Ocasek and The Cars were at the forefront of the music video world and recruited the legendary Andy Warhol to direct this one. He appears throughout, and also look for a very young Gina Gershon.

The song, my favorite from the album which is full of great tunes, both wildly popular and largely unknown, seems to me to be about The Wizard of Oz, but the video seems to focus on the dangers of gratuitous sex and violence in music videos. Somehow that seems too appropriate.